Elio is passionate about his work and his play! He said there really is no way to separate the two. He is equally passionate personally and professionally about archery and hunting. As a child he was always outside running and getting into one thing or another. But once he was introduced to hunting and archery, he was hooked forever! Poppop (our grandfather - Mommom’s husband) got him his first two bows. One was a suction cup bow and arrow set that he used to shoot and stick arrows on the front door of the family room. The second was a fiberglass recurve. Elio is pretty sure Poppop gave him those bows to keep him out of his own archery stuff when he was at work. Elio’s most memorable time was the day he shot a pheasant out of the air with a bow he made with a stick, one of Poppop’s bowstrings and one of his tournament arrows!

Elio has spent his entire life working to earn money. Now his work is to teach and learn more about archery. He is able to take what he loves the most and help guide others who also enjoy the sport to achieve their goals. His job allows allows him to find out about the newest products, different techniques and exchange ideas and tips with others every day. Elio is currently working on his level 3 USA Instructor class that will allow him to coach archers at the Olympic level. He is really intrigued to get into the Olympic arena of archery because he is less knowledgable in that sector but wants to learn more about it.

Coaching has become Elio’s latest passion. It makes him wonder how many people have entered the archery arena from Poppop getting him into it. Some people think he may get burned out by being around archery all week at work. But that’s not the case at all for Elio. The weekend allows him to hone his skills and continue to work toward his goal of a World Championship win in the Pro Division.

Elio continues his love for archery into the hunting season as well. He loves chasing big mature animals at the top of their game. At the end of the day, everything he does in archery all year is for that first day of hunting when he can climb up into a tree in the dark and watch the world wake up. He lives for that day every year. As the years go by they come more and more rapidly, but the stories of good times with friends and family in the hunting camp never seem to end.

Elio has many local, state and tri-state trophies. But his stand out is second place in the Mens Open at IBO World Championship with 900 plus shooters. In the hunting world, he has 4 150” Whitetails in the Pope and Young book and the biggest black bear ever killed in New Brunswick, Canada which was just entered into the New Brunswick Big Game Club record book, ranked number 1 (I saw a picture of this bear - this is one of the biggest bears you will ever see and I am guessing ranks as the biggest bear ever killed!) 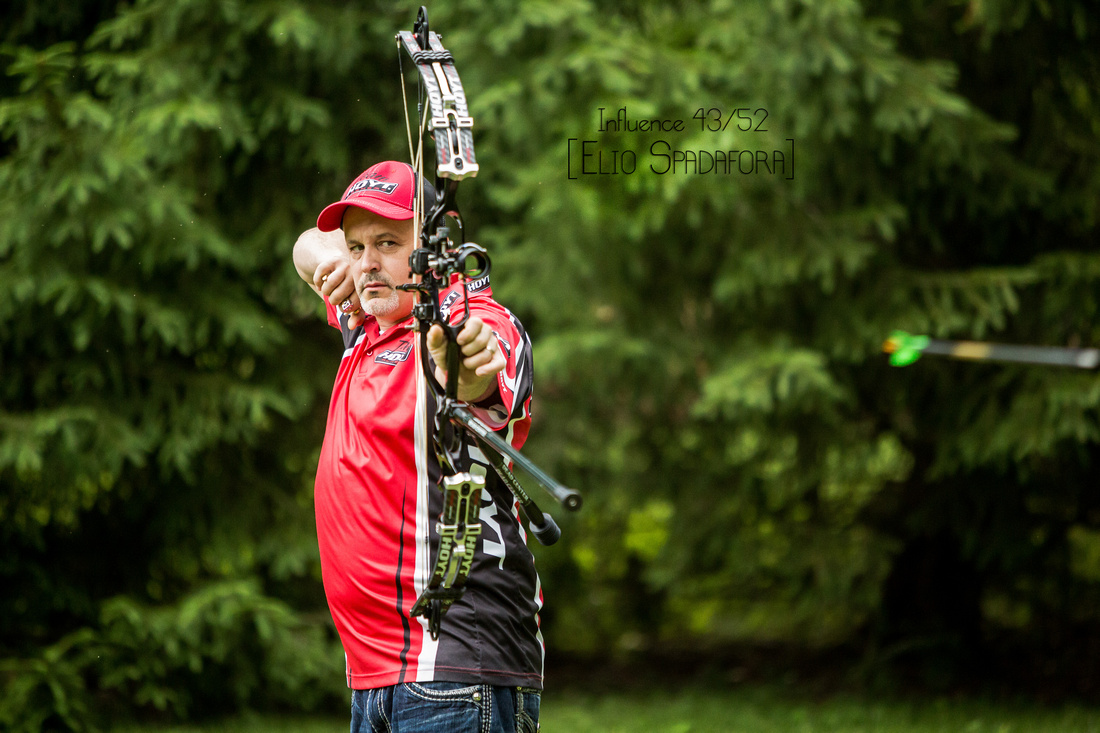 Elio is the third of four Spadafora cousins in this project (Mike, Jeanine) and the oldest of the bunch. Elio is one of those guys who knows pretty much everything. Need something on your car fixed? Elio could do it and give you a trick for the next time as well. Need help with putting up drywall or some other household construction? No problem, he knows exactly what he’s doing there too. Oh, you are drilling for natural gas? He did that for a few years too. And if you ever want to watch someone put an arrow through a ping pong ball at 30+ yards, he can point in the direction of someone who can. As in, he would be pointing his own finger at himself. Right before I took Elio’s picture last week, he put his arrow through a ping pong ball on a bet. I saw the arrow and ball for proof. Yeah, he’s that good!

Elio is one of those cousins who you just enjoy being around. As I said above, he really does know everything. So it’s fun being with him to learn all kinds of things. For a few years when I was working nearly full time with my Dad while I was going to Bucks Community College, Elio was working with my Dad as well. Even though we were in a hostile construction environment, Elio was one of those guys on a construction site who you actually enjoyed being around. He never really seemed to get mad and talked to you like a normal human being. Refreshing and juxtaposed to a screaming, angry guy who you would normally encounter out in the field.

This past May marked the 26th year since the massive Perkasie fire that nearly took out the entire town. It was massive and extremely destructive. What makes that day so memorable for me was that I was there. And I was only five years old at the time. It’s one of those memories that you have as a kid that you never forget; it is ingrained into my memory. I was at my Aunt Linda’s house (Elio’s Mom) where Mommom lived as well. I was outside playing with Mommom when out of the fields comes Elio and a few of his friends on their four and three-wheelers (the Spadafora’s love them some big kid toys!) He was yelling out “Perkasie’s on fire! Let’s go, jump on Nicky.” Off through the fields we went (they lived about two miles outside of town, in the woods.) What’s funny is I don’t remember getting into town on the quad, but I do remember getting there. I was chaos. Fire fighters were scrambling, sirens screaming and people standing in shock. We were able to get close enough to the fire that I felt the heat of the blaze. It was an experience you never forget because it hit you from three different senses: feel, sight and sound. The heat was nearly unbearable and we were standing about a block from the fire. Not long after that did a firefighter come pushing down the street yelling for us to get back. It was surreal and I was right there.

One last story about Elio was when I was around 8 years old or so. I was the ring bearer in his first marriage and he made a bet with me. He bet me that if I scored three touchdowns in my football game before his wedding, he would buy me a new Nintendo game. I’m not sure if he was being nice knowing I was more than likely going to score that many touchdowns or if he had no idea that I was a touchdown machine in my early days of Pop Warner football. But either way, I scored three touchdowns that game and Elio delivered on the bet. He got me John Elway’s Quarterback game for Nintendo. And I remember he gave it to me at their rehearsal dinner before the wedding.

Elio and his son Nico were also regulars at Mommom’s dinner on Wednesday nights. Having them living so close along with his brother Mike and his kids was great. Being able to see my ‘big’ cousins and ‘little’ cousins regularly was fantastic. Eating at Mommom’s with everyone was something I looked forward to every week. Nico is now overseas serving this great country in the Air Force. Thanks Nico!

It’s funny how you can vividly remember some things when you were so young. I think a lot of that has to do with the people you were around. And no doubt, being around Elio was something I enjoyed a lot. Hell, I still do! Thanks Elio,