Professionally, Mike enjoys the satisfaction of taking a concept/design from an idea to a reality. He likes the challenge of figuring out all of the intricacies and organizing the chaos to make it all happen. Mike has now been in the Architecture/Engineering field for over 20 years, working his way up the ladder. Now with D’Huy Engineering, he gets to work for one of the best local firms in the industry. He managed the first LEED (Leadership in Engineering & Environmental Design) Gold Level certified schools in Pennsylvania. He was a guest speaker for Iacocca Hall at Lehigh University after they completed the building.

Personally, Mike loves motorcycles. As a kid he would remember cutting out dirt bike advertisements every Christmas and putting them in whatever book his mom was reading to remind her that he needed one! He never let’s the resounding “Oh you’re going to kill yourself,” deter him. He likes the saying, “Four wheels moves the body, but two wheels moves the soul.” He rides his bikes, races them and fixes them whenever he can. He recently started to restore and ride vintage motorcycles. He gets a great amount of personal pride from fixing up a kickstart twin that he rebuilt himself that coughs, spits, sputters and runs like the devil! 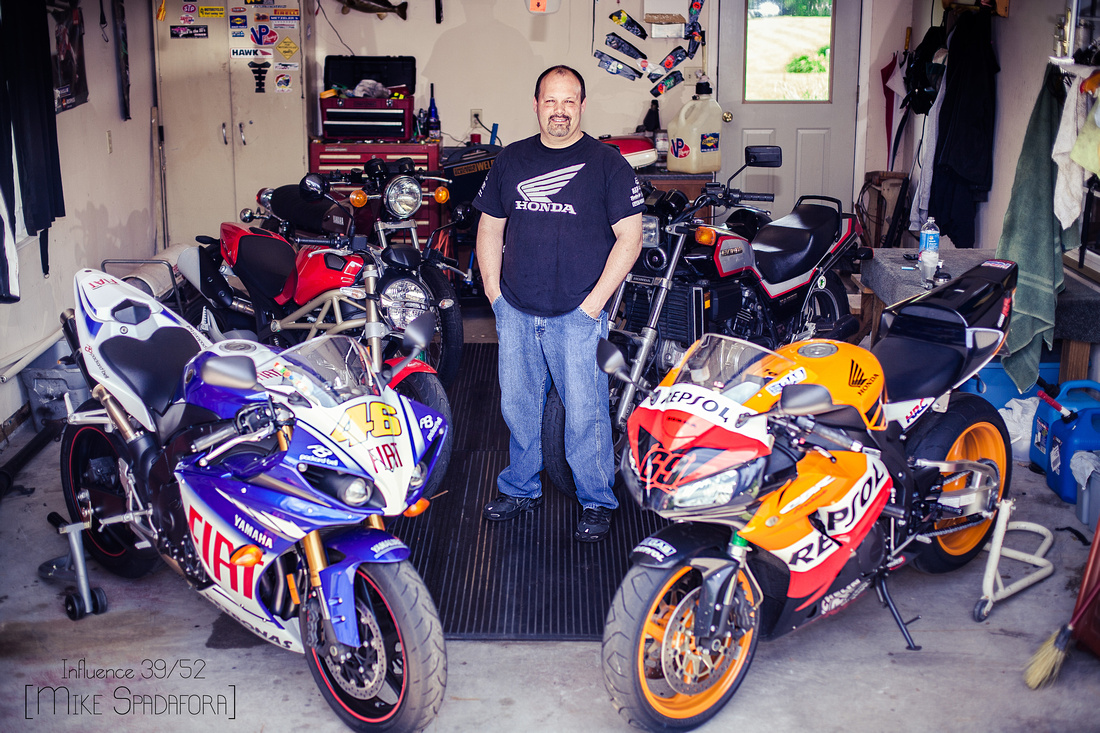 
Mikey is one of my four cousins on my Mom’s side. The Spadafora clan, well they are one of a kind! Mikey is one of three boys in a family that grew up with an Italian immigrant mechanic as a father. And that wrench didn’t fall far from the tree!


Growing up, Mikey used to babysit me when I was just a little tyke. And later in life, he had many influences on me growing up. There were a few summers when we went down to the Outer Banks, NC with the Spadafora families. The one summer, I went with Mikey on the drive down. I was so excited because I got to hang out with my cool cousin and drive down with him instead of in my parents’ wood station wagon! He was big into music, usually metal, and turned me onto it as well. “Ever hear this band?” He would say and play a track. That was Megadeath. Metallica and Rob Zombie followed. I was into early 90’s rap so hearing some metal was a bit different. But I loved it and soon had Rob Zombie’s More Human Than Human playing over and over on my yellow Sony Walkman cassette player! Summers at my parents house was also a blast. We had a real nice in-ground pool out back and Mikey would usually bring the kids over a few times a month to hang out on a Saturday or Sunday. We would be in and around the pool for hours, just hanging out. It's amazing to look back now and think about how much time you had as a kid. I don't know if I have more than two free weekends in an entire summer now a days!


Mikey has been one of my go-to’s for anything mechanical related. He would often show me a thing or two when I had my car at my parent’s house. He even gave me a bunch of his older tools to have and use for myself. He is also a huge jokester. If you ever need a laugh, Mikey is almost always going to be the one to deliver. He is quick and witty and can recount stories from his childhood with vivid detail. I love sitting around and listening to him tell stories about when he was a kid growing up. I don’t think there are many stories that he has told that don’t have you crying from laughter afterwards. Wednesday night dinners at Mommoms when I was in college was one of the best nights of the week. And a big reason why is because Mikey and his kids would come almost every single week. It was great to see him and his kids and get to hang out with other family members. Mikey always made it interesting and eventful!


Mikey has been a great cousin and to be honest, even more than that. I really consider all of the Spadafora cousins to be more like my Aunt’s and Uncle’s. They are all older than me but have been around and are so close to me in my life that they feel like more than just a cousin. But whatever you want to call him, Mikey has always been around to help and give a great laugh whenever you need it. Thanks Cuz!