Jeanette is a mother of five, grandmother of 14 and great grandmother of 15! If you add in extended family, she has a whopping 27 great grandkids! Jeanette was married to her Charlie Hillyer for close to 60 years before he passed back in 2005.

Jeanette is a ‘homemaker’ who was married at the age of 15. Her and my grandfather eloped down to Maryland to be married. And at the age of 17, she became pregnant with her first of five kids. She was used to staying in and raising her children for most of her younger years and learned to become a good cook while feeding the family.

After the kids were all grown up, she took on various jobs in the cooking field. She worked at a deli and also as a cafeteria worker at Pennridge High School. After retiring, Jeanette helped to raise and babysit many of the grandchildren and great grandchildren.

Jeanette enjoys her ‘scuzz’ magazines where she can read up on all the fake drama all across Hollywood. She also loves watching reality tv - ‘Big Brother’ was one of her favorites among many others. And if you can’t find a good Sudoku, crossword or jigsaw puzzle anywhere at your local store, that’s because she has them all! Sudoku has really become a favorite way to pass time lately and she can always knock out a crossword puzzle in the local paper or magazine. 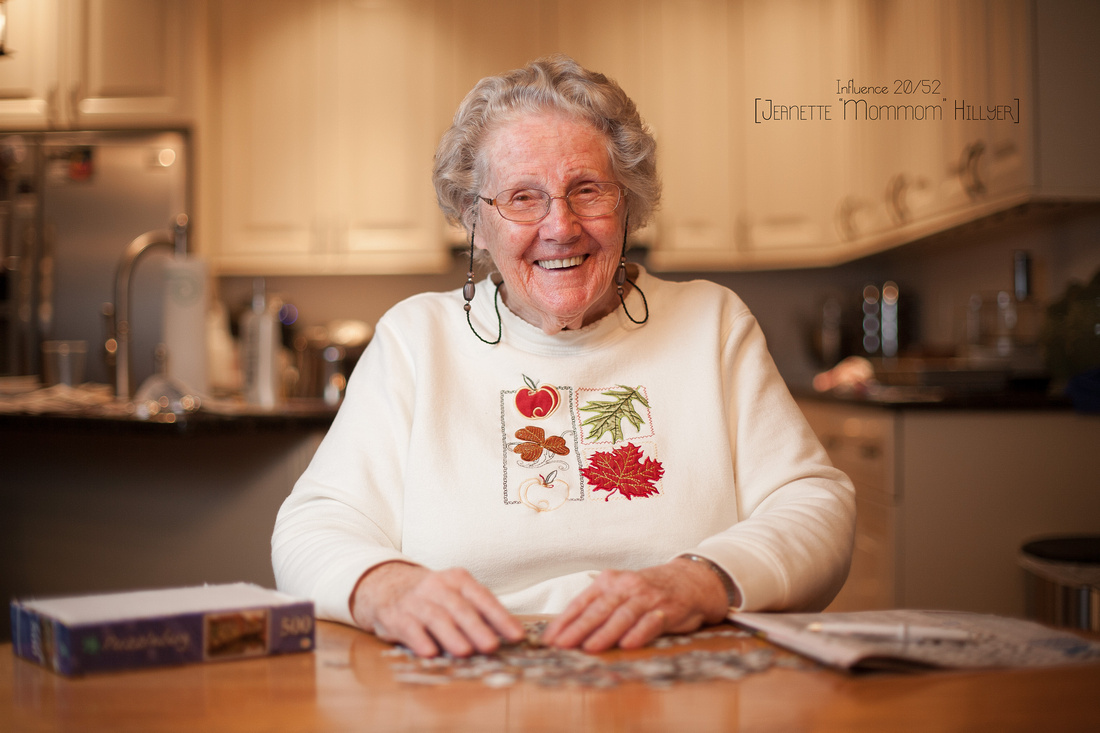 Mommom working on her puzzles

This is my oldest grandmother (not counting Ashley’s grandmother) and my first family member to make the influential people project. And that is fitting because just this past Friday, she turned 84 years young!

Mommom helped raise me when I was growing up. In fact, both sets of grandparents helped to raise me when growing up. I have vivid memories of every house that she lived in while I was growing up. The first house I remember was in Perkasie where her and my grandfather lived with their oldest daughter, Linda and her family. It was a crazy Italian household with lots of moving parts. We used to play outside where they had this big black cauldron looking thing. We would make ‘mud soup.’ Who hasn’t made some good mud soup in their childhoods?! Then they moved to a 55 and older community in Souderton. I can remember watching my favorite college football team, the Florida State Seminoles play their hated rivals the Miami Hurricanes on tv. When my sister and I would sleep over there we would ‘camp’ in their living room with sleeping bags. One night, we rented “Arachnophobia” from the local ‘West Coast Video’ (remember those?!) and my sister had no idea what she was in for. Needless to say, she didn’t sleep well that night!

I also remember eating marshmallow and chocolate ice cream at their dining room table. My grandfather loved marshmallow ice cream! That and Neapolitan. They also had a nice spare room where I would play video games and hang out as I got older. And you can never forget the sea-shell bathroom that had a huge conch shell on the top of the toilet that you always had to put your ear up to and listen to the ocean.

After living there for a few years, my parents decided to have my grandparents move in with us in our house in Perkasie. My Dad built an in-law suite off the front of the house. It was a nice one bedroom, eat-in kitchen and living room apartment for them. I loved it. All Mommom, all the time! Whenever I wanted to see my grandmother, I could walk next door. Plus, I had my grandfather to always be looking out for me. I couldn’t do anything right without help letting me know it was wrong first!

For a handful of years, we had “Wednesday Family Dinner Night” at Mommoms house. She would invite the family who was close by to come on over every Wednesday night for dinner. I looked forward to that day and dinner more than any other day of the week. I loved it. I got to see a bunch of family and eat Mommom’s great cooking every week. During one of those dinners is when I brought my wife (girlfriend at the time) Ashley over to introduce her to some of the family. She and I loved going over there on Wednesday’s and it was something we couldn’t wait for every week. Mommom would make all kinds of great food too - homemade stromboli, chicken bake, homemade lasagna, potatoes, stuffing, etc. After working long days of construction with my Dad, there was nothing more exciting that going home to shower and head over to Mommom’s for Wednesday dinners!

After my grandfather passed, Mommom decided to move to North Carolina to live with her daughter, my Aunt Lori. She lived in Manteo for a few years and it was nice having her down there when we would go on vacation to the Outer Banks. Since Manteo is just a few minutes from where we vacationed nearly every year, Mommom was already there so seeing her was convenient. She was even a stop on an east coast road trip I took with my good friend Jason and my brother in law Jeremy. We stopped in to see Mommom for a few days and stayed at her place. It was great being able to go the beach, then head back to Mommom’s house to see her and of course, get her good cooking! She even took us boys out on a date at an all you could eat buffet. Needless to say, the three of us got back to her house and fell onto the floor and didn’t move the rest of the night! That was a great end to our week long road trip.

To me, my grandmothers all hold a special place in my life. They both helped raise me and were always there for my sister and I. Mommom is a sweetheart and always took care of me. She would take us to Jamesway or Ames to shop for cheap little toys to play with. I loved going to there pick out something “under $10.” Losing my grandfather was tough and it obviously affected her tremendously. You don’t spend 50+ years with someone and not have a void in your life. But it has been a blessing having her around in my life for 31 years. I am extremely fortunate to have her in my life and for the fact my son Cooper gets to spend his youth with her too. And it’s also great seeing my Mom and my mother-in-law have the same type of relationship with Cooper. Having grandparents is one of the greatest gifts in life. And Mommom is the gift that keeps on giving - love you Mommom!