Jeanine is a stay-at-home Mom to her three children, Colby, Madison and Reese. She loves her job and wouldn’t trade it in for the world. She is paid back in so many ways by taking care of her family and volunteering. Her kids’ schedules have gotten a lot busier over the years and it can be difficult as the only parent home during the week, but she still loves it. She has a 16 year old with a learner’s permit, so running around takes a little more extra time!

Jeanine has been at home raising their family since her son was born almost 19 years ago. She and her husband Chris, both felt it was important for her to stay at home with the kids. She put her math degree on the side a long time ago. After her son was born, she went on to have two daughters and slowly began to get more involved in school and volunteering as they all got older. And volunteer she has, holding nearly every position there is at Seylar Elementary school for the 12 years her kids were there. That included: classroom parent, lunchroom volunteer, read-at-home parent, Race for Education coordinator, Home and School Association vice-president and president, Iron Pigs outing coordinator, dance chaperone, Mystery Reader, Cookbook Committee and various other event coordinator positions. She also served as the vice-president of CCN, Penn Central Middle School’s parent/teacher group and also as the spirit wear coordinator for a few years. Jeanine attended as many Parent/Superintendent meetings and high school principal meetings as possible to stay informed. She tried to be present in the elementary, middle and high school as well as in the various sports and clubs her kids have been involved in. She also volunteered in the church nursery for 10 years as well.

Personally, Jeanine really enjoys watching and supporting her kids at all of their activities. Whether it’s a concert, swim meet, water polo match, track meet or even just a practice, she is there. Since Jeanine’s husband, Chris, travels for work during the week, the chauffeuring falls on her. When he is home, they are there together watching, timing, scoring or volunteering in some way. That is their social life. With their oldest now in college, attending every one of his track meets has become impossible and that was a very hard adjustment for Jeanine. But in her spare time, she enjoys gardening, scrapbooking, yoga and traveling. She loves seeing her kids turn into ‘big people.’ They are all teenagers now and she loves them!

Jeanine is very impressed by the women who came before her. She has had such great role models in her mother, aunt, grandmother and mother-in-law. They all raised great families and worked outside of the house. Jeanine has a great quote: “To all of those full-time working mothers out there, you amaze me!” 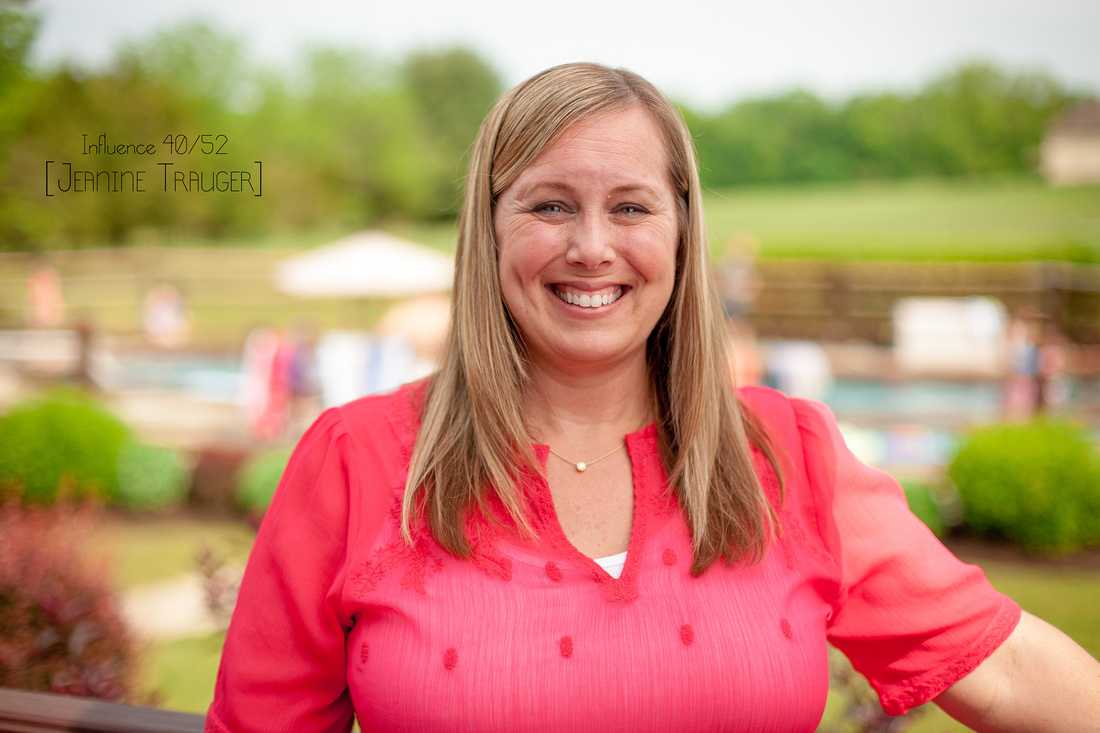 Jeanine standing on her porch, overlooking her pool during a family party

Jeanine is the only girl of the Spadafora cousins and the second of that bunch to enter the project. Jeanine has basically been my older sister my entire life. As long as I can remember I was with her. Sadly, I was with her so long ago that she used to put makeup on me. And put my long, curly, Italian hair in a small rat-tail ponytail. Don’t laugh, this stuff isn’t funny! But joking aside, she really did all of that. When hanging out over at her parents’ house (my grandparents used to live there as well) I specifically remember when Jeanine would put makeup on me. She had this big makeup mirror thing. It folded out, with a big mirror on the inside and tons of blue and green makeup on the inside of the doors. I thought it was cool to have her paint me in the latest 80’s green and blue makeup. She also used to take my way-too-long, Italian mop and put a rubber band on the curls in the back. Leaving me with a rat-tail for everyone to see. I didn’t think anything of it, because you know, I was like six or something. I don’t know if there are any pictures of me from those days with her, but lets just hope they don’t make the internet rounds…

Jeanine also used to hang out at our house a lot. She would babysit my sister and I often and would be over the house hanging out and swimming in the summer. Another great memory was the summer our pool was getting put in. I think I was maybe seven or eight years old and Jeanine was over watching us. The pool was all finished and the water tanker was putting the water into the pool. I don’t know how many tankers it took but it was a bunch. Well in between trips, Jeanine went sliding down the pool. It was awesome because only the deep end was filling up and it was like half full. But the liner was all wet, so she went sliding down the ramp into the deep end. I don’t know if she knew beforehand but the water was freezing! I remember her running back into the garage (where I was throwing back about three A-Treat orange sodas - in the glass bottles mind you) with a towel wrapped around her, her lips all blue and shivering like crazy! Haha.

Another great story was from Christmas, I was just about 12 years old and we were over at my Aunt and Uncle’s house. I remember being in the living room when Jean and Chris showed up and everyone was saying hi. She started talking to my mom, saying something along the lines of, “hey guess what,” or “you’ll never guess.” And I burst out saying, “what, you’re pregnant?!” She looked right at me and went “yeah how did you know?!” Needless to say, my mom lost it, started freaking out and chaos ensued. I honestly had no idea and I have no clue where that came from but I did say it. Call it intuition or something! That was when she was pregnant with her first, Colby, who just finished his first year at Penn State. Feels like yesterday!

Jeanine has always been around, and my Mom and sister just adore her to death. She has also been like an older sister to my sister and they are very close. Same with my mom, but I think my mom thinks of Jeanine as an older daughter (or maybe younger sister?!). Jeanine was a huge help and supporter when my sister got sick. I know my sister appreciated it and I know my mom did for sure. Jeanine has really turned her family into the perfect family. I know that doesn’t really exist, but she has done a fantastic job of getting as close to perfect as you can get! As you can see from her rap sheet above, she is very involved in her kids’ lives. She is very supportive of what they do and has built a great structure for them. As a new(er) parent, it’s awesome to watch her in action and hear about what she does day in and day out.

Thanks for being more than a cousin and a great role model. Love ya!