Dana has been around the elderly for as long as she can remember. Her mom was a CNA since Dana was four years old. Dana would often go with her to work and had the pleasure of spending time with the residents. She fell in love with the elderly and healthcare and at 16 years old, became a CNA. She feels as though the elderly bring so much to the younger generations with their wisdom and life experiences. Later, Dana went back to school to get her LPN and continued in long term health care as an LPN for the last four and a half years now. The satisfaction of knowing that she did something to make the day of a resident by getting them to laugh, giving them a hug or taking their pain away is indescribable to her. She loves the relationships that she has made with the residents and their families. People think of the elderly as ‘old’ and ‘boring’ but they are just young at heart with physical limitations. They help her get up and go to work each day!

Personally, Dana is most passionate about her family. Being a wife and a mom is so exciting and rewarding to her. Sitting out on the deck with friends and family or floating in the pool listening to Kenney Chesney is the perfect day for her (we won’t hold the country thing against her…) She also loves her dogs - watching them play and taking them in the pool is a blast. She also loves going to the mountains and hanging out in the boat, tubing or skiing. Sitting out in the sun, looking at the scenery is therapeutic for her too.

One of Dana’s biggest and proudest accomplishments is as a mother. She feels it’s such a great honor to have such amazing kids. She enjoys watching them grow and change in their personalities. She realizes that not everyone can have children so she feels blessed to have been given the ability to be a mom. She started much younger than most but it has been the most rewarding experience of her life. She is amazed at how much love you can have for one person, the unconditional and unchanging kind of love that you would die for.

And a great paragraph that Dana sent me that I didn’t want to put my own spin on. From Dana:
“I have seen and been through a lot in my life divorce, teenage parenting, financial struggles, losing loved ones, and everything I have been through has only made me a stronger more rounded person.  I am blessed with an amazing family and friends and have learned so much through all of my experiences.  I try to enjoy each day that is given to me and appreciate the little things in life.  I am proud of my accomplishments and hope that I can be an example to others.  I learned that hard work and perseverance pay off in the end. It is amazing what a smile or laugh can do to the soul!” 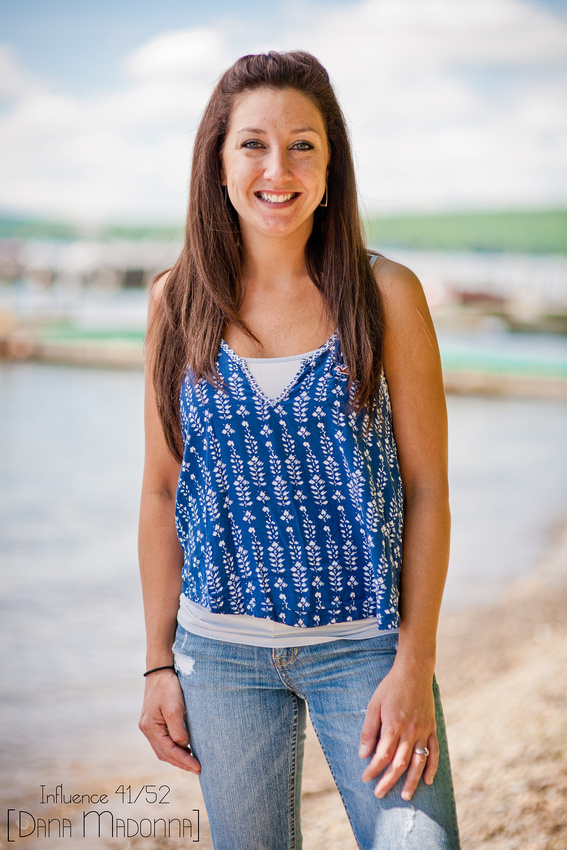 Dana with her back to Lake Wallenpaupack

Dana is my cousin and we are only about a year or so apart. So we grew up together, having fun at our Grandmother Nanny’s house, playing kids games and running around up at the cabin in the Poconos at Lake Wallenpaupack.

Dana was that slightly older girl who I had in my life. And as with most older girls, she kept me in line. And by that I mean, when we would play at Nanny’s house, she would pull my hair. Then if she got tired of holding my hair, she would migrate to my ear. Either way, I got the point and cried like a girl. But I loved the hell out of her anyway and really enjoyed being around her growing up. Dana was also cool and into things I didn’t really know about yet. We would spend summer weekends together up at the cabin having a blast. She introduced me to an awesome rap song by Paperboy - Ditty. This was 1993 folks. So humor the ‘awesome rap song!’ I will have you know it was a top 200 song of the 1990’s! And as a young teenager girl she was into hair and makeup. Well one amazing night up here at the cabin, we had Paperboy on the old cassette player blasting away. She then said something to the effect of, “Hey Nicky, get over here and sit down. I am going to put gel in your hair and make it all messy.” I and all of the females in my life can thank her for introducing me to hair gel that night. Before that I had a crazy, wavy, curly and nappy italian mop on my head. So being able to control that beast was awesome. Not to mention I was just beginning to care about girls around that time. So if she made up my hair and liked it, that meant I had a shot at other girls!

When Dana was just 16 years old, she got pregnant. It was obviously a surprise and most of the family was a bit distraught. The coincidence was that her mom and my uncle got pregnant with Dana at just around the same age. I will never forget the first time I met her husband, Chuck.I had never met him yet but I felt a bit protective of Dana. I ran into her (pregnant) and Chuck at the Dublin Carnival. Chuck didn’t greet meet with the best first impression. I think he was smoking, had on a wife beater with big saggy Jnco jeans or something. I wasn’t thrilled. But boy was I wrong. Chuck is an awesome guy and an even better Dad. Sometimes it’s not about first impressions!

And the way that Dana and Chuck have handled themselves in raising their kids is awesome. When you are faced with raising a kid at 17 years old there are not many teenagers who can stand up to that challenge. But Dana is one strong chick and it shows as she has raised an awesome family. She has two fantastic kids who are all grown up and mature themselves. After raising her daughter at 17, Dana and Chuck decided to have another. Just a few weeks after Dana delivered, I went up to see her and the baby. And I brought along a special someone, who at the time, was ‘just a friend.’ Yes, that was my wife, Ashley. Ashley and I just started hanging out when we went up to see Dana and Gavin. He was just this little cute ball of baby. I told Dana that Ashley was ‘just a friend.’ Little did I know, 13 years later we would have a two year old of our own and expecting another in just a few months. What makes this story so crazy is every time I see Gavin now, it makes me realize how long Ashley and I have been together. He was just a 2 week old baby. And now, he is nearly six feet tall, about to turn 13 and in middle school. Yeah, I am getting old!

I always looked up to Dana and some things haven’t changed. I admire the hell out of her and how she has turned herself into an awesome Mom, raising two great kids and putting herself through nursing school. Thanks for being more than just a cousin Dana. Love ya,

Nick Pompei Photography
hahaha "grandma" I was going to put that in but figured the world would think we were nuts! haha. Who figures out a game to play with ancient Encyclopedias when they are like 8?! We did!