Frank has been in education for over 20 years now which is his professional passion. Frank enjoys working with students and their families to uncover their motivations and to help those students establish and achieve their goals.

Personally, Frank enjoys spending time with his wife Sara and figuring out what their next adventure will be. They both enjoy traveling and discovering new places and the culture that surrounds it. They also love spending time with family and friends and knowing that no matter what is going on, they can always rely on one another. Another added bonus of time with friends and family is that it often includes great food and wine! Frank also enjoys being active and loves to go hiking, climbing, biking running and competing in triathlons. 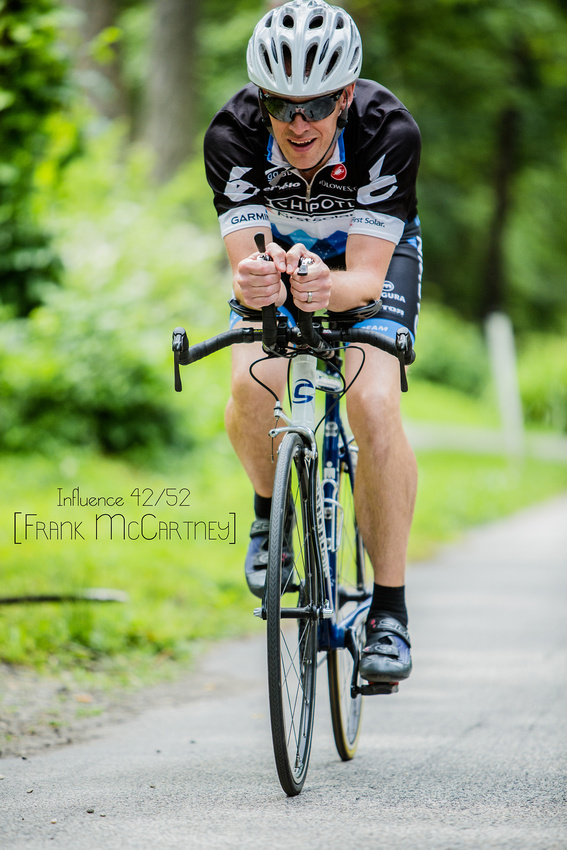 Frank down in the aero bars on his triathlon bike

Frank McCartney. Hell of an athlete and hell of a nice guy.

Frank was one of the first people that I met through our triathlon club, Philadelphia Triathlon Club. I worked with a girl named Julie who actually introduced me to the club. She was a member and said I would really like it. So I was really excited to see what the club was all about and get into a new adventure. I somehow convinced Ashley to come down with me and then to join as well! We went to the kickoff party at Manayunk Brew Pub and got to meet a great group of people. One of the couples we met there was Frank and his wife Sara. Both are super nice, super friendly and really helpful. The world of triathlon was completely new to me and I really had no idea what I was in for.

A few months after the kickoff party, the club had one of its first organized training weekends of the year. It was up in Jim Thorpe, PA. So Ashley and I booked a hotel, packed up our gear and headed up. We really had no idea what we were in for (especially Ashley!) Frank and Sara were the group organizers for the trip and had set us up with an incredible training weekend. Friday night after getting there, we went up to the local high school so we could get a swim session in. This was my first time in a true Olympic sized pool (I only train at LA Fitness with a small shallow pool, same length however.) When we got there, we met up with Frank and Sara and got the weekend going. Friday and Saturday nights we went out to dinner with everyone and we met some great people. Saturday’s bike session was a crazy hilly course (Jim Thorpe, duh) but there is this one hill, Bugsy’s Hill, on the course that is a crazy steep hill. Going up that hill not long after I started riding a bike for the first time was a serious challenge. But after doing that hill, there are not many others that would compare.

At the time of meeting Frank, he was a well established triathlete. He was placing near the top of every race and was a real force out on the course. He was a very solid swimmer, a good biker and a very fast runner. When you are good at all three disciplines, you have a recipe for success. In 2008, I think Frank put together one of his best performances at the Timberman Half Ironman 70.3 triathlon. He finished 20th overall, with 12 of those top 20 being pros! And not just any pros, you are talking two of arguably the best of this generation in Andy Potts and Chrissie Wellington. So to finish not far behind those athletes is just amazing. Frank had a killer performance that day and I still remember seeing the results online in amazement! It was incredible. Not to mention as stated above, Frank was ranked in the top 30 in the world for Amateur Triathletes in 2005!

So when I joined the club in 2007 I had no idea how to swim (and by that I mean real, freestyle/open water swimming) bike and run competitively. So I had to learn and train myself for months (I still am!) to get to be a decent enough swimmer to compete in the open water. Frank was always there to help out. That night up in Jim Thorpe he helped me through my workout and gave me plenty of pointers. It was only a week or two later that I had my big ‘breakthrough’ in the pool and was able to swim more than just a few hundred meters. I am someone who loves to watch and learn from people who are awesome at what they do. And knowing and watching Frank at that time of my triathlon career was perfect for me. It really couldn’t have happened at a better time.

A few years later, it may have been the summer of 2008 or 2009, a bunch of us including Frank and I went up to Lake Placid, NY to watch a few of our club members compete in the Lake Placid Ironman. For those of you who don’t know, an Ironman is the pinnacle as a triathlete. It is a brutal one day endurance race with a 2.4 mile swim, a 112 mile bike and a 26.2 mile marathon run at the end. So I tagged along for a training weekend and to watch our friends tackle this tough course. We had a great time camping and training. That weekend I had two incredible experiences. The first was my introduction to Nutella - yes I had never had Nutella before that weekend. But Sara and Frank were experienced campers and knew a good caloric recovery food when they saw one! Making s’mores with Nutella after a hot day of training = bliss! But even better was watching this race. It started raining literally the second the racers entered the water and stopped just about at the midnight cut off. It was just about 15 hours of heavy, chilly rain. We stood on the side of the road cheering on everyone from the pro’s to the old age groupers. It was without a doubt one of the greatest experiences of my life. It was so damn inspirational and really humbled me in many ways.

Frank has since sustained a rash of leg injuries that have kept him from competing at a high level. It’s a damn shame but I guess sooner or later the body just says ‘I have had enough’. He took a few years off to try and heal up and did his first triathlon this summer. Even after having time off and being slightly hobbled by his legs, Frank still placed 16th overall and 2nd in his age group. Even not at his top form, he still kicks ass!

Triathlons have really changed my life. After wrestling in high school, I didn’t have the competitive edge and adrenaline push anymore. And of course taking five years to get fat and sloppy in college didn’t help! But finding this great sport has really been a life changing event. I have met incredibly awesome people who all want to have fun and push themselves as well. Not to mention it has kept me in great shape and provided that competitive outlet I enjoy. I started out slow but have really come into my own the last few years. It’s very hard without a coach and many people around to train with. So I always think back to Frank’s advice when I am swimming, biking and running. Thanks for showing me the ropes and for being a great role model Frank!