Frank has been pipefitting for 20 years now. Professionally, Frank is most passionate about retirement and gets very excited to come home.

Personally, Frank really enjoys the outdoors. Taxidermy, archery hunting, fishing, four wheeling, working in his garden, making wine, watching Looney Tunes with the family and “fixing everything my wife breaks.” Frank has enjoyed archery hunting for 32 years now and one of his most memorable accolades was scoring a trophy buck from Illinois.
Frank has been with his wife Judy for 16 years now, being married for 11 years. They have two great daughters, Madelyn who will be 13 in September and Alyssa who turned 10 in April.
From Franky: “My wife say I’m gorgeous, hysterical and can cook good eats! I also hate Obama.” 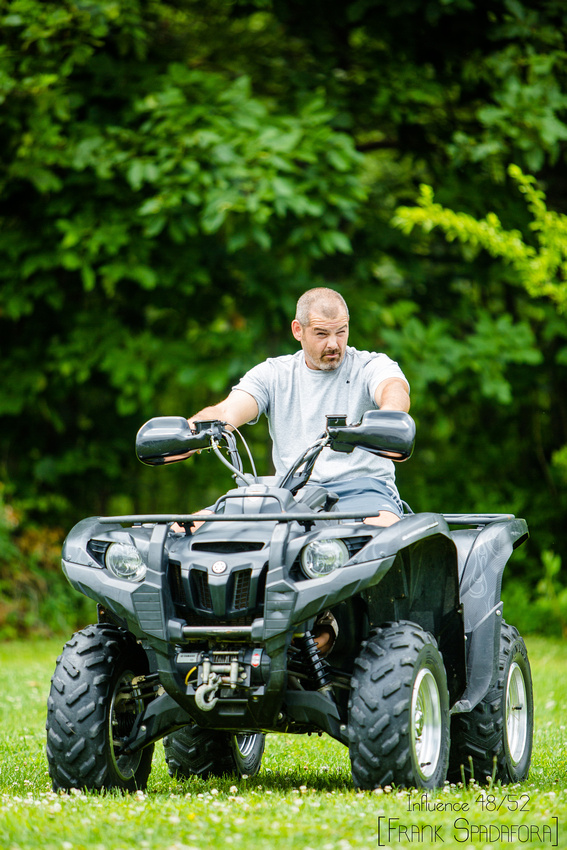 If the responses above didn’t set up this blog, I am not sure what else would! Franky is the last of the four Spadafora cousins (Elio, Mike, Jeanine.) And he certainly is not the least entertaining. Which if you know any of the Spadafora’s, you know how funny they all can be.

Franky has one of the best laughs you will hear in a person. It’s a deep down belly laugh that is infectious. He will get you laughing and follow right along with you. The stories that he can tell will have you laughing so hard you will be crying. The old family stories of the Spadafora’s are like something out of an Italian hollywood movie (minus the mobster influence.) Cursing, hitting, laughing, fighting, you name it and it comes out of his stories. One of my favorites that I have heard countless times is the “pass it down” story. They were all sitting at the table eating dinner and Franky was doing something his father didn’t like. So his Dad smacks his brother Mikey (sitting right next to his dad) in the head. Mikey looks at his dad in complete shock and says “what was that for?!” “Pass it down to your brother” was the response Mikey got. When you hear that story coming from Franky and Mikey, in their boustrous story telling, you will be crying when it’s done!

Another great story about Franky was one day at his parents old house in Perkasie. I was there, and was maybe five years old. Franky comes pulling up in his older Chevy muscle car, pops the hood and flames come shooting out. Him and his buddies scrambled to put the fire out. For whatever reason I can still vividly see his black car, white stripes on fire in the driveway! It wasn’t funny but it’s just one of the things I remember about Franky!

Frank is a very talented guy. He is really good at his job (despite hating it!) has great skills mechanically and is a wizz in the garden. When I was at his house taking his picture he showed me his garden. It’s a serious garden, not just some little spice garden. This thing is serious business and he really takes a lot of pride in it. The food that comes out of that garden helps feed his family and that is something that I love. He also makes his own wine with all kinds of variations. The guy can do it all!
Franky has always been that cousin that I enjoyed seeing. Between all four of the Spadafora cousins I have seen Franky the least over my lifetime. So whenever I do get the chance to see him, his wife and their girls, it’s always fun. I can say over the 31 years of my life, I have never seen him in a bad mood. I am sure he may have been a few times but you could fool me. Anytime you see Franky it’s a guaranteed lock that you will hear a hilarious story. He keeps a smile on your face all the time.
Thanks for the laughter and for being a positive influence, Frank!