Eric does Quality Assurance for ASF east and nearly everything else there as well. What excites him most about his work is the experience he is gaining to put on his resume. He has worked his way up the ladder and is now running his own department. He also has his 16k medical degree that he is not currently using. He was hoping to be dead before paying off all of his school loans (his words not mine!)

Personally, Eric says his life can not be any better. As a kid, Eric lived about 10 lives thus far, really getting his money's worth! He has now settled down with his beautiful wife Nikki (married last May - www.nickpompei.com/baker) He and Nikki have a dog who they love spending time with. In fact, Eric would rather spend time being with them more than anyone else!

Eric also enjoys spending time with a lot of his close friends. He has remained close with a lot of friends from his childhood and holds his friends near and dear. He is also involved in many sports and currently plays for the Telford Rangers. His team is in a league which is one of the biggest adult baseball leagues in the country and very competitive for a 30 plus league. He was also a boxer on and off for eight years. He also helped train an MMA fighter who went on to fight a very high profile MMA fighter in the UFC.

Eric thanks his parents for their support and tough love. Eric was always involved in something and his parents helped guide him along. One night after training with the heavyweight boxer at the gym, his mom came up to his room. She stopped dead in her tracks and was screaming and crying. Eric was bleeding all over his pillow - he suffered bleeding in his equilibrium and over night had bled onto his pillow. Needless to say, Mrs. Baker was not a happy camper!

Eric wouldn’t change anything about his past. He is very down to earth and sees the world for what it is. 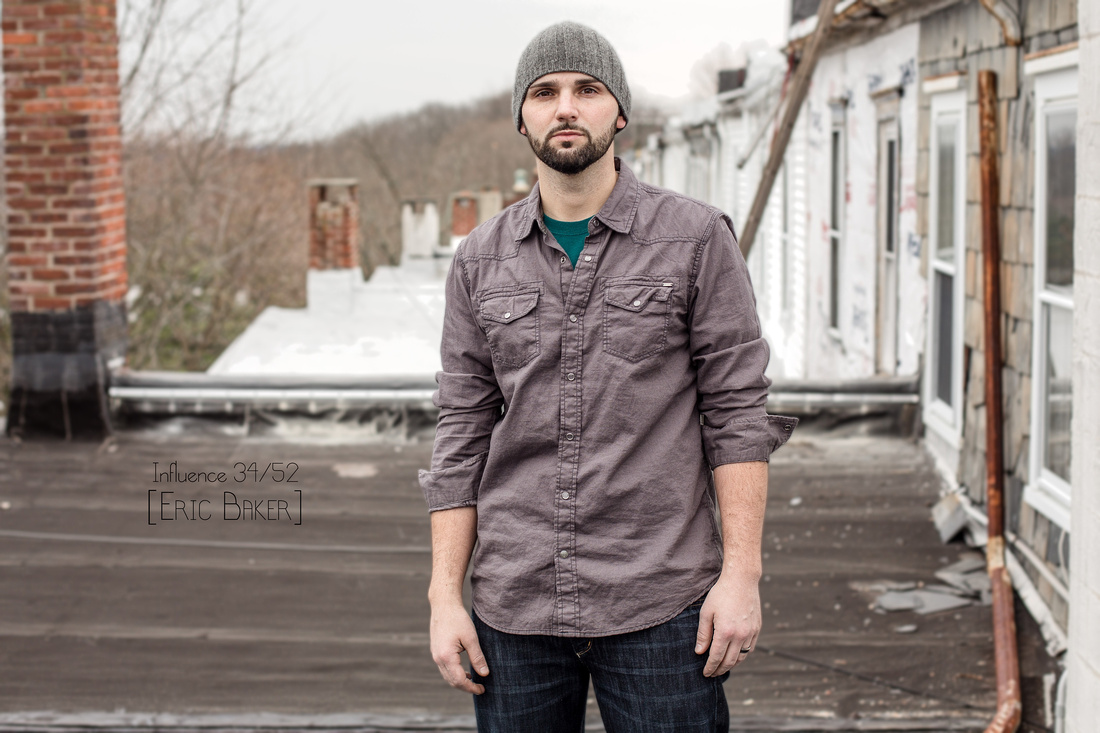 Eric on the roof outside his childhood bedroom on 3rd St. in Perkasie

Eric has been one of my best friends since 9th grade. He was that older kid who I wanted to be friends with. He was tough, cool and a bad ass. And as a little 9th grader, getting to hang out and be friends with a kid like him was awesome!

We hit it off right away and quickly became inseparable. Eric, Tim, and I all became the three amigos - hanging out together nearly every waking minute. We would all feed off of each other and the crazy stuff we did was, well, crazy. One night, during the week because you know, what do you do during the week as a high school kid, Eric and I were bored and driving around. He had this awesome, 1985 VW Rabbit GTI. The car was awesome and I wish he still had it because it’s a collectors car now! My parents had gotten my family a new Sony camcorder. At the time, it was a sweet camcorder. So I have this camcorder with me and Eric is driving down the road near our high school and we see this dead raccoon on the side of the road. And what else do high school kids do with a dead raccoon? Nothing right? Not us. We pulled over, hopped out and grabbed his jumper cables from his hatch. I put one end of the cables on the coon’s dead foot and then pull the other end up to the passenger door and get back in, hanging out the window. So now, I am carrying the video camera in my left hand, hanging out the window while holding the other end of the jumper cable (the other end attached to the coon) and begin filming. Eric peels off and now we are dragging this raccoon about 2’ behind his GTI with me hanging out the window filming the entire thing. I am laughing so hard its nearly impossible to make out what’s dragging behind the car because the camera is vibrating from my laughing. We take this thing up and down the road a few times and now have a lineup of cars behind us, witnessing the craziness. We thought this was the funniest thing ever. So Eric gets this idea to put the raccoon on the rock. Now the rock is this huge boulder that Pennridge had outfront of the high school so kids would spray paint and graffiti it instead of the building itself. So we park his car, carefully get out (coon still attached and dragging) while I am still filming. We walk up to the rock, tag up the rock with a line that lives in infamy to this very day - “1 luv coon” We then drape the raccoon overtop of the rock in a proper burial/symbolism of the fun we had. I of course am filming all of this right up to the end when we peel out of the parking lot, basking in the awesomeness that we just accomplished. If there was YouTube back then, we easily would have topped over 5 million views, I can guarantee it! This tape still exists by the way…

Eric was one of three boys. So his younger brother was easy prey for the three of us. We would have so much fun beating up and picking on his little brother and all of his friends. Since I would always be down in the wood lab at the high school, I would make us some awesome paddles to beat them with. If anyone has seen the movie ‘Dazed and Confused’ you all know exactly what I am talking about! I even drilled holes in them so when you swung them they moved through the air faster! We would be hanging out at Eric’s house just playing video games and just decide it was time to go beat up his brother. We would kick in the door, jump on him, rough him and anyone in there up, then go back to our business. Man that was good times. Of course, we got older and they somehow got physically bigger than us and that stopped quickly!

Eric is also a second rate stuntman/daredevil. He jumps from trees, hangs your cooler 20’ in the air out on a thin branch for you to clean up the next day and even paralyzes himself but doesn’t really paralyze himself. That’s a fun story. On our first trip down to Virginia beach for Senior Week, we had this awesome house with a pool out back. Because it was senior week, some people were drinking during the day and Eric being Eric, did a nice flying squirrel or flip or something into the pool. But the pool was only like four feet deep. No one thinks anything of it and we are going about our business. Well he slowly surfaces and somehow crawls out of the pool and lays on a chair. A few minutes later he starts murmuring something about not being able to feel his legs and had a splitting headache. So we start worrying because Eric doesn’t complain about pain. He told us how when he jumped into the pool he smashed the top of his head on the bottom. He said everything went limp and he doesn’t remember getting out of the pool or the last few minutes. We rushed to get him some water to drink to kind of calm down. It may have been the only time I have ever seen Eric drink water. So luckily he came around and started to feel his legs again. I am not positive but I think he has secret superhuman powers. Either that or he is really lucky, which may also be the case! Either way, that didn’t slow him down because I know he has done some crazy stuff since then!

Eric I have had some amazing times together. The time I spent with him has given me some of the funniest and craziest moments of my life. We have had some rocky moments in our friendship, and who hasn’t? But he is someone who I could count on in a heartbeat if I needed something. He was there for me when my high school girlfriend and I broke up, when my sister got sick, when I tried picking fights with kids I had no business fighting, when I would need a harrassing for not skipping school with him and Tim, when I wanted to have some fun on a random school night and everything else in between. If I needed something right now I could call Eric up and he would do it for me, no questions asked. That’s just the type of guy he is.