Shawn the Animal Flaherty. The man, the myth, the legend.

Animal has been a cook most of his life and has been doing industrial insulating for the past 11 years. He likes working with his hands and the creativity he can get from certain jobs.

Personally Animal really enjoys watching and playing sports. He has been playing soccer (don't hold it against him folks) most of his life and still continues playing in intramural leagues. Animal also loves to be in the kitchen cooking and grilling. He got that passion from his Dad who was a cook. His Dad owned a great restaurant out in Haycock, PA that was a huge car meeting place in the late 1970's and 1980's. 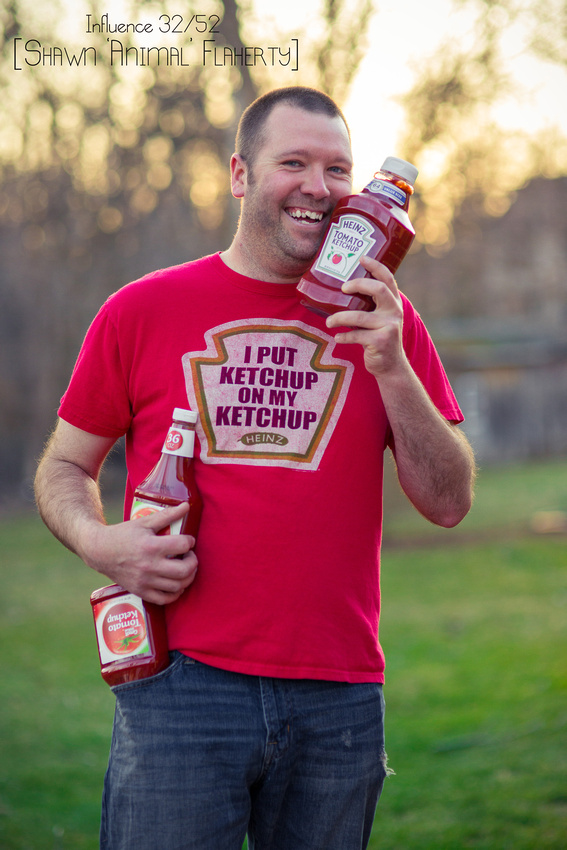 Animal. The Animal. His name is synonymous with greatness because, well, he is great. He’s the Animal.

First, we will start with the name. How does one get such a badass nickname? No one really knows except for a story from his good childhood friend and neighbor, Brian Scholl. I asked Brian this question back in high school. His response was simple and to the point. “Because he’s the Animal!” And it stuck ever since elementary school. So Animal went all through middle school and high school with friends and even teachers calling him Animal. Hell, in college I had our friends ask me who Shawn was after I called him that once. They literally didn’t know what his real name was after three plus years of knowing him! Haha.

So Animal and I got to know each other real well in our Sophomore year at Pennridge. It was Chemistry class and we sat right by each other and hit it off right away. Ever since then we have been best friends. Animal and I would hang out a lot in high school and we haven’t stopped since. We would plan our schedules around each other so we could have classes together. Some of my funnest moments with Animal came in high school. We would take Woodworking class together and had a blast there, too. One of the funniest things I have ever seen in my life occurred during our Senior year, right before Thanksgiving break. Animal and I were coming out of our Chemistry II class. Which, by the way, was like an AP or Honors class or some crap. Basically, we were in way over our head with a bunch of smart kids. Animal and my combined IQ didn’t equal what these kids had in like third grade but we didn’t care. We caused a ruckus in there, got bad grades but laughed our ass off. Anyway, it was at the end of the day, right before we left for Thanksgiving break. The cheerleaders had put up this scarecrow, dummy like mascot person thing in the middle of our audion (The audion was a general stepped down sitting area, right in middle of the school with lockers and classrooms surrounding. It’s where everyone would hang out in between classes.) So they had this thing decorated in the rival colors and jersey (Quakertown is Pennridge’s huge next door rival and the Thanksgiving day football game has been going on for decades.) So they had this dummy looking football player in the middle of the audion with like hay bails around it or some other crap. So Animal says to me “Yo, I think I am going to tackle the guy after class on our way out.” I of course see this as a golden moment in time and talk this up like its the greatest idea I have ever heard. Which it was! So I hype him up all week, with the ‘tackle’ coming on Wednesday, when we get out at noon for early dismissal. Word spreads quickly amongst the student body so when we come out from our classroom there is plenty of onlookers ready to see the action. We both come out of class with a mission ready to execute and nothing was stopping Animal. In one of the greatest acts of physical domination I have ever seen, Animal gets a running head start, leaps over the bottom step and dives head first at the dummy. He absolutely plows this thing, blows it completely up. He pulls himself out of the rubble and runs off like a kid stealing candy at a store. I am laughing hysterically, kneeling on the ground laughing so hard that I can barely move. It was so great. I ran out after him and we proceeded to bask in the awesomeness of the act. It has been 13 years since he made mincemeat of the cheerleaders football dummy and I can still see it vividly as if it happened 10 minutes ago.

Animal and I also went to college together. We went to Bucks County Community college for two years and then went off to Millersville together. We were also roommates at MU along with my future wife and another friend. We had some great times out at school, many, many unforgettable nights and funny stories to go along with them. Like the first party we had at our apartment when he got wasted off of some sort of fruit punch and vodka. He got so drunk early in the night that he went to puke, ran to the bathroom all to find a friend of ours in the bathroom taking a pee. He couldn’t hold his puke so as he opened the door he blew red chunks all over the bathroom and the kid taking a pee. Needless to say in the hot summer air, it smelled great in there. Oh and if you were to go back to 2 E-Courts, chances are you would still see red debris in the bathroom floor vent. I’d bet money on it!

We have been best friends ever since sophomore year, went to school together and he was in our wedding. And I wouldn’t have it any other way. Animal is a great guy. He is humble and can be slightly reserved but he is a great friend. We get to see each other often and talk on the phone a decent amount still. It’s usually always sports talk. He is my go to sports talk guy to vent about Philadelphia sports frustrations and how I could possibly lose a fantasy matchup when there was no way I should have. I can usually count on Animal for anything I ask him for as well. He’s been on vacation with my family many times and has really become part of my family. Everyone loves having him around as he is great company. But one of his best attributes has developed over the last two years. The last two years that my son Cooper has been around. “Uncle Aamal” as Cooper would say has become one of Cooper’s good friends. Animal is so good with him, get’s him great Christmas presents and really has a great relationship with him. Let’s be honest, most guys are not always the best around children. Something about kids gets them nervous or scared thinking they might have to take care of one. But not Animal. He really enjoys playing with Cooper and Cooper just loves him as well. Animal came to the hospital the day after Cooper was born and held him - it was one of the best moments I have had as a Dad. To see your closest friend holding your kid is something that is hard to describe. So glad Animal has been around in my life these last 15+ years and to help be a great Uncle as well.

Thanks for being a best friend and a great uncle, Animal!