Professionally, Dave likes to build things from scratch. He likes knowing that everyday you have the ability to improve and build upon the previous day. Slowing down and maintaining status quo is not a good thing according to Dave. He believes that the day you aren’t moving forward is the same day you start moving backwards. Dave started with Benjamin Foods right out of college in 2006.

Personally, Dave loves toys, grown up toys! His new project is almost done - a 1964 Cadillac Fleetwood. This is the same car his late father had when growing up. So when he found the opportunity to buy a car that was nearly identical he had to jump on it. Dave is also a big sports fan and enjoys going to the Eagles game whenever he can.

Dave is also very excited to be getting married. His fiance Karen has been by his side through thick and thin and he wouldn’t be where is without her.

Dave feels that you should absorb as much as possible from any job. The experience and knowledge you gain from that alone is priceless. 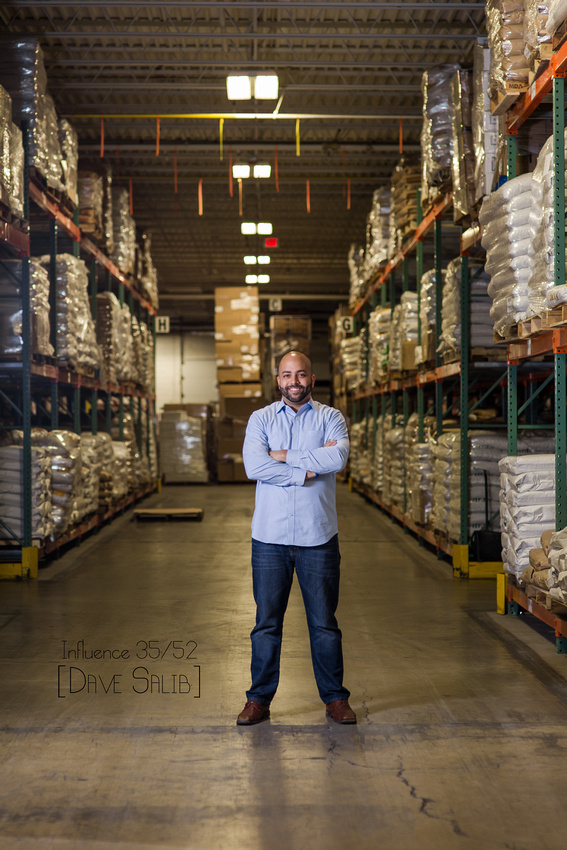 Dave standing in the warehouse of Benjamin Foods

I met Dave during my Junior year at Pennridge. We had Architecture class together and we sat right by each other at the drafting tables. What I distinctly remember about Dave was his awesome afro. Yep, he had a full on, legit afro. I was infatuated by it! So not only was Dave cool, because you know, if you have an afro at Pennridge High school you are immediately cool, but he was a great guy. Dave was smart and had an awesome work ethic. I used Dave as my crutch in that class. He knew his stuff and I was a bit of a goofball so naturally, I asked him for a lot of help!

Dave and I ended up going to Millersville together. I was a grade ahead of Dave but I went to Bucks Co. Community College for two years and he went to Penn State for two years. He decided to transfer into Millersville which was great because Dave and I had become good friends. It was nice having a local friend in the same department with me that I could be with. After meeting our other friends Jay and Vanessa, the four of us quickly became inseparable. We tried to stick together as much as we could. We tried scheduling the same classes just to help keep our sanity in the craziness of the Tech. Ed. department at MU. We had awesome trips down to Virginia Beach for our club conference and plenty of happy hour trips to burn off stress!

At MU, Dave continued what he started at Pennridge in the classroom. He was smart and had some amazing woodworking skills to back all of that up. He did some fantastic projects and I really looked up to the way he worked. Dave is one of those guys who you want around you because he makes you better. You want to work like Dave and have the same level of workmanship that he does.

After college, Dave decided it was best to venture into the business world and went to work for a wholesale food and liquidation company. On the surface you would think he was crazy. And to be honest, I did somewhat as well. You go to school for years to get a degree in Education and as soon as you graduate, you head into business! But most people are not Dave Salib. See Dave Salib is one savvy dude. He is calculated and knows exactly what he is doing. And now, Dave is the Executive Vice President of Benjamin Foods in Hatboro, PA. He has helped build the company from four people to now over 70! Hearing his story and where the business was and where it is now is not really that shocking to me. It’s as successful as it is because Dave is involved in it. Dave just has that touch.

But even more than successful, Dave’s a great guy. He’s super nice and would help you out whenever possible. In fact a few years ago when his company was still focused on liquidations, they bought out the old Sands Casino in Atlantic City. Dave was surprised to find that they had their own woodworking lab in the casino. He and I talked around that same time and I told him that my lab at school didn’t have a table saw. He immediately said I will donate you a table saw that I bought out of the Sands Casino. So he did. He even had it delivered to school! That saw has been used for five plus years now and has helped hundreds of my students create better projects because of it. That’s Dave being Dave.

So it’s no shock to me or anyone else that Dave has helped build a very successful company from nearly nothing. Dave isn’t one to settle for anything less. If you know Dave you know he’s a guy you want in your life for many reasons. I was lucky enough to meet Dave in high school and we have been great friends since. Our time at MU was fantastic and we have some great memories. Thanks for all the help over the years Dave, I am pretty sure I would have flunked out of a class or two without you!