Nick has his Masters degree in Social Work from Temple University. He also worked at St. Gabriel’s Hall as a residential counselor and caseworker before moving onto Bucks County where he has been a juvenile probation officer since 2004.

Nick really enjoys working with kids/teenagers. To him, the best enjoyment is knowing that he has the potential and ability to change their ways before it is too late. Most of his kids just need to be guided in the right direction, unlike adults who tend to stay stuck in their ways.

His biggest gripe about his job is that in most cases he receives, he feels that if many of his kids would be raised by a different set of parents or in a different home/environment, they would not be where they are now, being caught up in the juvenile system. To Nick, it all starts at home. WIthout that support system, things begin to breakdown and the kids act out in certain ways for attention.

The biggest reward in his job is when he receives a call a year or two after a juvenile is released from supervision to check in and let him know they they are in college, at a trade school, working full time at a job they really enjoy and most importantly, haven’t gotten into any more trouble.

Personally, Nick loves music, good beer, playing soccer and watching the Flyers (even though they let him and everyone else down this year…) but by far the most important thing to him is his family. He loves spending time with his wife Melissa and his son Brennan and daughter Emily. When it comes to his kids, it’s great to relive his youth through them. Coaching is also very rewarding as he gets to watch Brennan develop into a much better player than he was at his age. Also, family movie nights on the couch are about as good as it gets!

Nick feels as though his job has helped him to see the importance of family, being there to support his children and encouraging them to be the best they can be at whatever they want in life. He wouldn’t have it any other way. 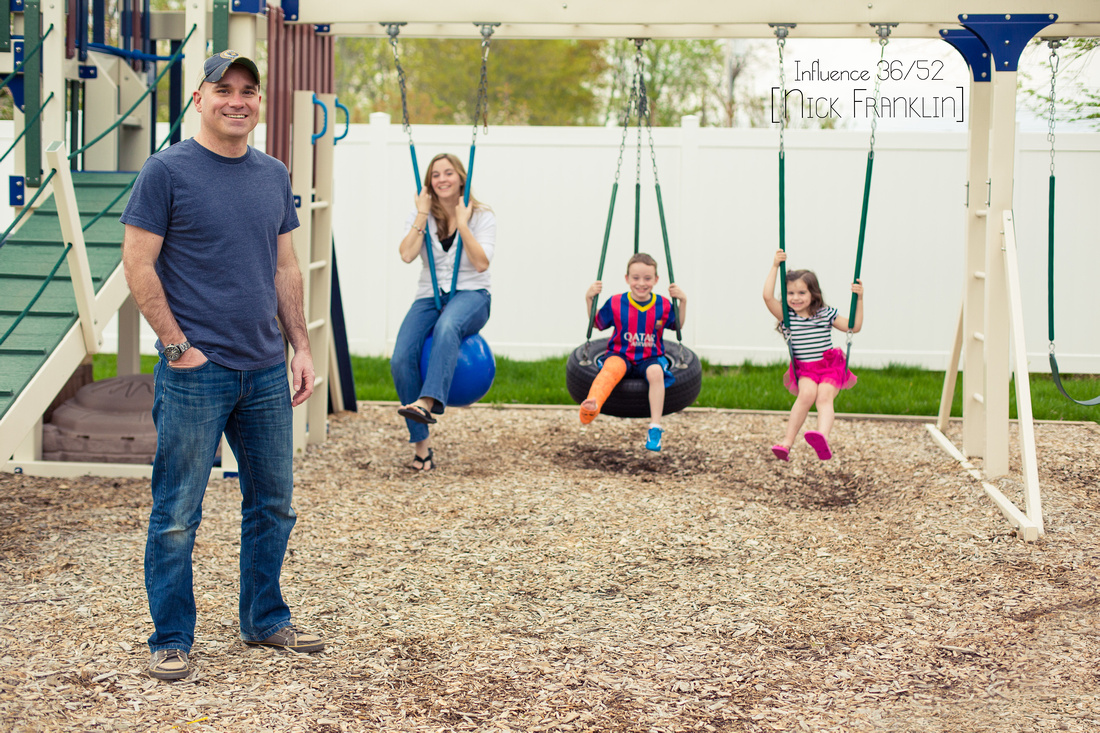 Nick and family out back on the playground

Nick and I met just about five years ago now when he moved into the house directly across the street. I was worried as to who was going to move into that house. It’s always nerve racking to figure out who your neighbors are going to be! But boy did we hit the lottery when the Franklins moved in!

Nick is the perfect neighbor. I can ask him for help at any time, borrow something, lend a hand, etc. and he is always there. Plus, the best part is our beer relationship - we both love good craft beer. I started brewing my own beer about three or four years ago and not long after, Nick got started as well. It’s great bouncing ideas and recipes off of each other. I will have one style of beer on and he has something different on and its great because we can sample our own stuff at any time. We also like handing beers off to try out as well. “Hey, have you had this, or had that” gets asked almost weekly. We both have friends and family in the beer industry as well so that helps fuel the fire as well!

But what’s best about Nick is how great of a Dad he is. His two kids are always outside enjoying themselves and hanging out. And now that Cooper is getting older he is begging to play with them as well. I just admire the way Nick handles being a father. Growing up in my family, tempers were short and the emotional bond was not quite so strong. So I always thought that’s just how things were. But watching him be a parent made me realize that being calm and supportive go a long way. Nick is easily the most level headed guy I have ever met. I don’t think I have ever seen him angry or mad at anything. And when he is with his kids it’s the same way. He never raises his voice and is always being supportive. I admire the hell out of him for that and it has really helped me with my son as well.

Thanks for being a great neighbor and leading by example. Oh, and don’t move!