Mike has been a mason for 41 years and a self employed builder/mason contractor for 34 years. Mike enjoys making peoples’ homes more inviting. He enjoys upgrading their houses and seeing the excitement on their faces when the job is completed.

Mike’s passions are his family, wife, children and now grandchildren. He really enjoys being a P.I.A.A. football official, hunting, fishing and playing with his grandchildren and watching them grow. He also loves spending time with his son, daughter and their spouses. 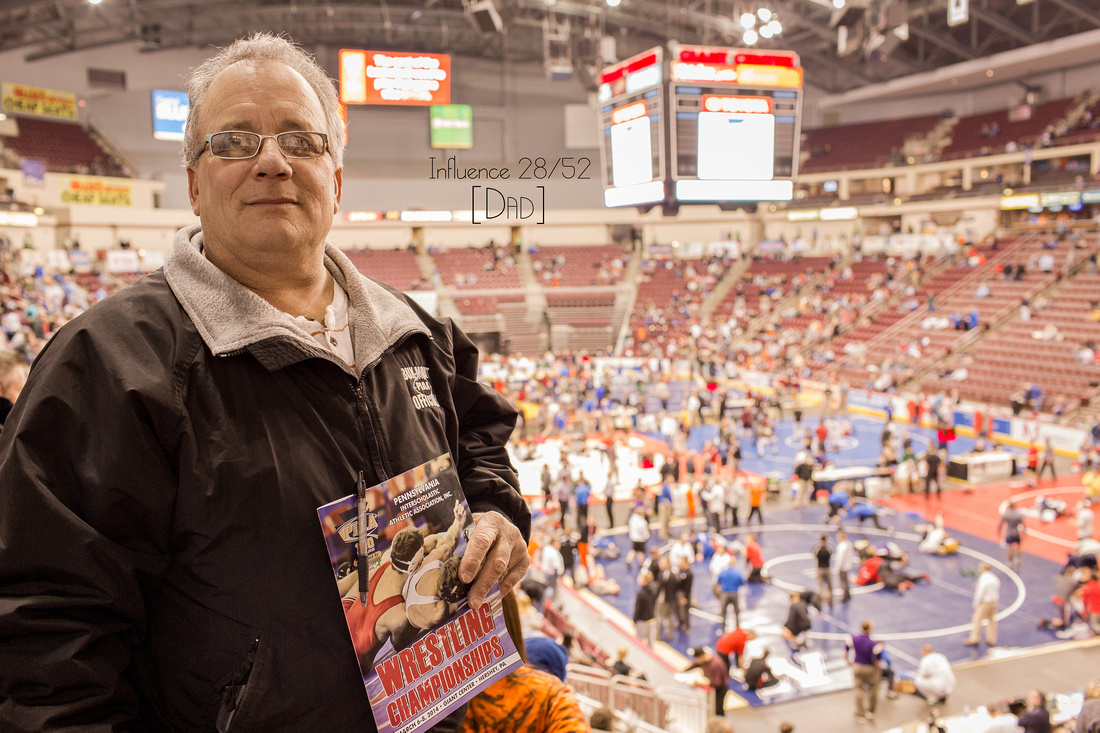 
After last week’s big influence, it may be hard to top. But I keep the pace by having my Dad up this week! As with all father’s, the influence is immense. And if anyone who knows my Dad, you certainly know he is a good guy and quite the character.

My Dad has been working hard with his hands for over 40 years. That’s a long goddamn time to be busting your butt. And if you have ever worked construction, an 8 hour day is long enough. Multiply that by 41 long years and that is certainly exhausting work. But he loves doing what he does. He is obviously very good at what he does and is quick to jump on nearly any kind of work imaginable. That can sometimes be a problem when he is constantly wanting to upgrade your house every few months!

His own masonry business really hit full stride in the late 80’s and 90’s when the construction field was beginning to boom and come to it’s peak. So luckily for him, he and his company (his foreman during those years, Ed) really enjoyed a solid two decades of great business. After being successful in the masonry field, he ventured into building custom homes. One of his earliest projects was our house up on West Rock Road in Perkasie, off of Rt. 313. He bought the land off of his grandfather who lived just off the back of the property. It was an awesome 10 acre piece of land that he built the house on, put in a pool, a pond and a huge pole barn for his business. We moved there when I was around three years old and they just sold the house about five years ago now. I grew up in a great house - the basement was finished a few years after moving in which made the best sleepover spot where we would have Nerf wars, video game binges and the occasional party! The pool was a frequent for all of my family which made the summers even more enjoyable when everyone would come over. Growing up catching frogs and fish out at the pond was also very cool. It’s something that as a kid you don’t know any different. But looking back now it was such a great place and I was very fortunate.

To run your own business you have to be extremely dedicated. And my Dad is very dedicated to working. He likes to work, like a lot. And when you are more or less forced to work for his business when you are growing up, it can be a little frustrating. My summers didn’t consist of sleeping in, playing video games all night, hanging out with friends at their house or any type of typical lazy early teenage kid activities. Instead I was getting up at 5am to go bust my ass all day. It was super hard work and very tiring. But it certainly showed me how to work hard, plenty of hands on skills that I still use today and a better perspective on life and what is really important. Seeing my Dad work so much and having to work any time I had off pushed me away from the construction field. I didn’t want to do that the rest of my life. I know he certainly would have wanted me to take over his business. I started working when I was just 14 years old and put in many years of time so I knew my way around. It would have been a good opportunity for me and for him. But it wasn’t my cup of tea. I wanted something different in my life and had dreams of my own.

My Dad was heavily involved in both of my sports of football and wrestling when I was growing up. He was a coach and even President for a while of the Pennridge Greenjackets youth Pop Warner football teams. Then when I stopped playing football in high school and focused on wrestling, he helped out whenever he could with that as well. He helped on the booster club and in setting up tournaments and things like that. My senior year we hosted Sectionals - it’s a very big undertaking to run a post-season tournament. He donated a lot of his time and effort to run that tournament. A few months later we had our banquet and as a senior I spoke to the team, family members and coaching staff. I went through a long list of people and coaches who made our year so successful. I praised them for their time and efforts in all of the various things they did for not only myself but for the team. I had the entire speech written down and it went off pretty well. But when I was nearing the end I looked up and saw my Dad sitting there at the tables and realized I hadn’t mentioned a word about him. I was devastated. I completely looked him over and had no clue until I was basically done with the speech. I was almost walking away from the podium when it hit me. I started back to the podium and started saying how I overlooked someone who was a huge help and someone very close to me. That’s about as far as I made it. I could barely get out a few words when I started crying. And I mean crying. I couldn’t talk, every time I tried it started again. I tried to talk a handful of times and I just couldn’t get it out. I started looking at my fellow teammates next to me and was trying to make jokes with them so they could make me laugh so I could refocus. It didn’t work, I just couldn’t do it! In between bawling like a little girl, I finally said “My Dad”, people started clapping and he got up and gave me a big hug. It was so emotional for me because I knew how much he did for me and the team. And I always try to give thanks and praise to people who work hard and have helped in any way. So the fact that I forgot him really got to me. But I think the dramatic soap opera cry scene I had in front of everyone made up for that!

Now that his business has slowed down and he just does smaller side jobs, my Dad has more time to relax a bit, referee some football and enjoy his time. We both enjoy watching and following wrestling. When I was in 6th grade he brought me out to Hershey for our first ever trip out to States. It was awesome. We stayed the entire time and loved it. We went up religiously every year and it was something we looked forward to. Once I started coaching it became harder because there were times I was actually on the floor coaching! So things certainly came full circle for me from being in the stands to having a wrestler on the mat and coaching him in the corner. But just last week we spent a day out there and now we will have even more time to go out and enjoy ourselves. It’s a lot of fun and it’s good to get away and watch some great wrestling.

He loves spending time with my son, his first grandkid. And now that my sister has a little girl, he and my Mom have their hands full. He’s been great with Cooper and I know Cooper loves being around him. Ashley and I are very fortunate to have great parents who also love spending time with Cooper. Lucky for Cooper though, he won’t have to throw around cinderblocks in the summer. Instead, he and Poppop can go out fishing and enjoying the finer things in life!