John is passionate about selling properties. He enjoys helping people sell or purchase their largest asset. The art of the negotiation and the challenges that people face when buying/selling/flipping properties is always exciting to him. He has been licensed since 1994.
John has also won several awards, some of which include the ‘Top of the Rock Award - Prudential Real Estate Network.’ and the ‘Triple Gold Award - Keller Williams Real Estate.’

Personally, John is extremely passionate about his family. He loves his wife to the bone along with his son Maddox, 7, and his daughter Saige, 6.

As a coach, John enjoyed getting the absolute best out of every kid. He hoped to make an impact on their life that they were better people when they left as seniors than they were when they came to him as freshmen. He tried to inspire and motivate his athletes.

His personal accolades are quite lengthy in the wrestling department. As a wrestler himself, John became the first ever State Champion in any sport at Quakertown HS. He was also the only wrestler to ever record an undefeated season, 35-0. He also still holds the highest winning percentage in Quakertown Wrestling history with a 94.6% record (88-5.)

As a coach, John was an assistant for five years at Quakertown HS (his alma mater.) He then moved on as the head coach for the Pennridge Rams for 11 years. He coached the first ever State Wrestling Champion in Pennridge wrestling history (Dan Goetter.) He also coached the first ever State Medalist in Pennridge Wrestling history (Eric Woehr - 2nd place.) He was the coach for eight total State Medalists, four of them as State Finalists in his 11 years as Coach. In his best season as a Coach, his team finished 25-2, sending six kids to the State tournament, and as a team finishing eighth place. 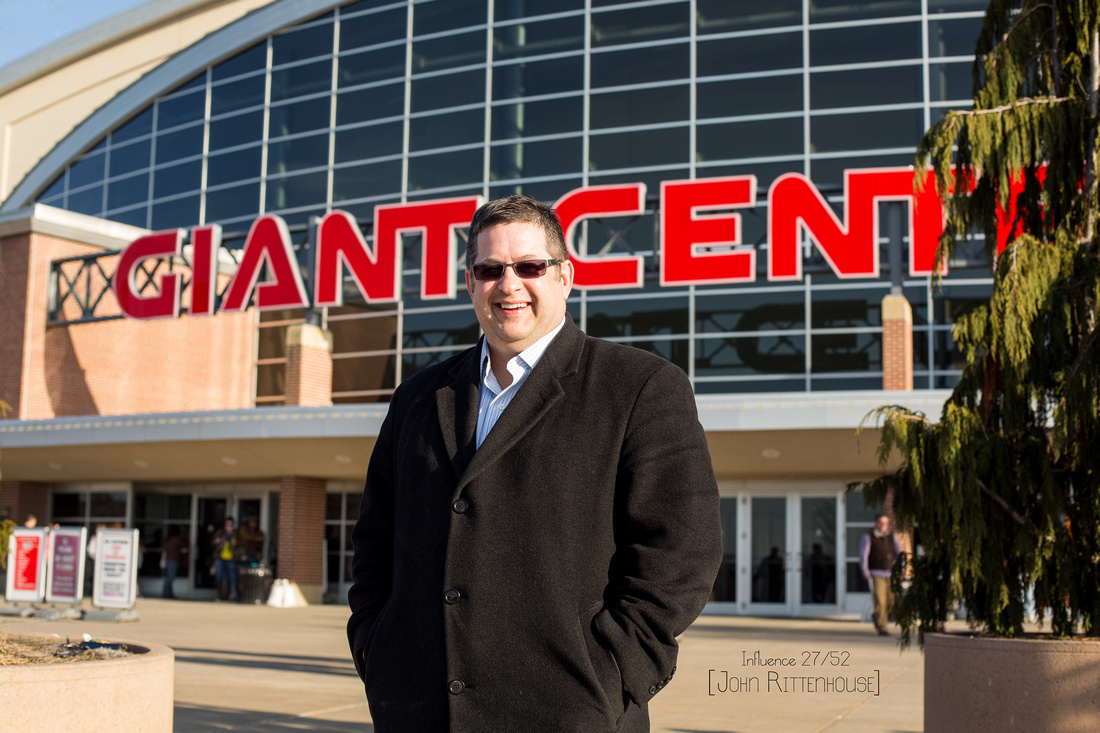 Coach House - one of the most influential people in my life, bar none, hands down. The guy that taught me guts, hard work, dedication and no nonsense. If there is one person who I could pick out of the 52 people that you will see over the course of this project who has changed my life for the better, this is it. This man fundamentally changed my life in more ways than I could ever describe in a few words being put down in this blog. But I am going to do my best!

As a 14-18 year old in high school you never really understand what you have in front of you. And by the time you do, it’s too late. And this was clearly my problem as a high school wrestler. I worked my ass off but in between my ears, I just wasn’t ready to be ultra competitive. I was an average wrestler who worked hard and put in the time. I just never ‘turned the corner’ as they say. But what I gained from those four years as a wrestler with Coach Rittenhouse at the helm was life changing. It wasn’t until I was done wrestling that I realized what I had within me. See at the time when I was working hard it was just for wrestling. I never realized that the hard work and time I was putting in was benefitting my life in the long run. So once wrestling was over and I met challenges in my life, they seemed insignificant to the grinding workouts we had at practice. Every problem, hard job, bad situation, etc. was able to be overcome. I had it within me. I knew how to push myself and how to put things into perspective. Those things do not come easy for people, except many of those who wrestled.

Wrestling gets a fairly bad wrap in society. We wear a tight singlet and physically grab other men, all while sweating. Sure, it doesn’t look normal! But there are very few things in your life that prepare you for nearly anything life has to offer other than wrestling. Coach Rittenhouse ran a practice room that was without a doubt one of, if not the hardest practices of any high school program. And I can say that with confidence and would challenge anyone to show me otherwise. A 3 mile run as a warmup before every practice, followed by sprints up a half-mile road, a gruelling 2+ hour wrestling practice and then a solid 30 minutes of conditioning at the end. It was day in and day out hard as hell and physically draining. It tests every part of your fabric. You get super frustrated and angry at nearly everything. Add to that the fact that my first two years I was cutting a lot of weight. Which meant my frustration level was peaking and my energy level was as low as you could possibly get. It was gruelling. But you learn how to push your body and better yet, you learn how to train your mind.

“Your mind will quit before your body!” Coach Rittenhouse used to yell when he was pushing us in conditioning. And it is a quote that I live by in my life to this day. In fact, on my Road ID band (identification band in case of emergencies) I wear when riding my bike and during my triathlons has this very quote on it. Read that quote again, “Your mind will quit before you body.” Have you ever heard anything more profound than that? Seriously, keep saying it over and over. When you are physically pushing your body to the limit it’s usually your mind that will give in. Your mind is what lets you down. The human body is one of the most amazing wonders in all of existence. Think about how it all works, how it was put together and how it functions. Human beings can do unfathomable things with their bodies. And they can do those things because they have trained their minds to believe they can. And that statement that Coach Rittenhouse would yell at us every day is spot on. And it is the basic principle behind my life and the way I treat the remaining years of my life. My success in triathlons, races and anything athletic/competitive that I enter all comes from this principle. I know what I am capable of doing and I have trained my brain to understand that as well. And once you get your mind behind what you want to do physically, you begin to do amazing things. Everyone has this ability, whether you are extremely overweight, someone who doesn’t work out, or even as an elite athlete, we all have the ability to train our minds to believe that we can. Some things may seem insignificant, like walking a quarter of a mile or running 50+ miles. It can be done, you just need to tell your mind it can be done.

A great story about Coach was, I believe, the summer going into my senior year. He used to run a wrestling club, Scorpion, at our school. We would have a few of the local area schools come to train. Well one night, this guy comes in. Apparently Coach Rittenhouse knew him or something. This guy was a behemoth - easily 6”4” and every bit of 250+ lbs of pure muscle. I mean dude looked like he was out of ‘Muscle’ magazine. So somehow he challenged Coach Rittenhouse to wrestle. I’m not sure how it came up but either way, Rittenhouse obliged as if it were no big deal. Now my cousin and I start to see and hear what is going on. We both stopped practicing and were watching in awe of what was about to happen. Now to set the other half of the stage, Coach Rittenhouse is not a big guy. At the time, he was going around 170-180lbs I would say, and maybe around 5’10” tall. In other words, David versus freaking Goliath… So they start wrestling and I am thinking my god, Coach is going to get picked up and slammed on his head. I was wrong. Rittenhouse reaches back on this guys head and throws a headlock like I have never seen before. This headlock is coming from left field, I mean the power he had behind this thing would have killed someone smaller than this giant. He catches this guys head in the perfect position as he hits the headlock and just launches this dude head over heals. The guy slams the mat and the headlock was so tight the guy tapped out. I mean, what, like, wait, huh?! After I realized that I was not dreaming, I started screaming like a little girl. I was so hyped up and going bonkers of what he just did. The guy slowly peels himself out of the mat, looks around, shakes his head out and starts to stand up. I don’t know what happened to that guy afterwards because I was still going so nuts I never saw him leave. It was unreal. David took down Goliath with 180lbs of out-of-shapeness and sheer will, grit and a headlock that would have killed most other people!

The last cool story about Coach (there are plenty more by the way) was the one time when I was just a freshman when he gave a great speech while demo-ing a move. He showed the move and then stood up and started to talk. He was talking about how whatever you do, you have to do it hard and you have to know that you can hit the move on anybody. At the time he was working down in the city. So he says, “I don’t care who comes up to me on the streets or in a back alley. Shit, they can have a gun. I am not afraid of anybody. I will take down anybody, I don’t care” Now some may look at that quote and think he’s an idiot, or he’s got a big head on his shoulders. But that’s not the point. The point is he believed that he could take anybody down at any time. And that is an attitude he tried to instill in us. It doesn’t matter who you are wrestling, you can take them down whenever you want. It’s all about the confidence and mental edge you have over your opponent.

So many stories and awesome moments that I had during my high school wrestling career. It was hard work and it was a grind. But Coach Rittenhouse helped transform my life into what it is now. I owe all of my hard work and mental edge in my athletic/competitive lifestyle I live now to him. Every time I enter a race, regardless of what it is, I expect to win. I expect to be up in the front. And I expect it because I was taught to expect it. I wish I would have had the mental edge I do now, back in high school. I would have been a much better wrestler. maybe I would have taken that next step. But I never did and that is certainly a regret that I live with. But I have taken that lesson and applied it into everything I do now to push myself harder than before. Life is so short. I choose to physically push my body because I embrace it and I have been given a physical gift of health and am capable of doing whatever I put my mind to. Whatever you do in life, work hard at it and give it your all. Coach, I cannot say thank you enough. I’m glad we have remained close over the years and I hold our relationship very close. What you have done for me can never be repaid. Just know that I can hear your voice any time things get tough - it’s a priceless gift. Thanks House!