"Big Ed." Ed is a recently retired Mason after 40+ years in the field. From small side jobs at customers’ houses to big commercial jobs, Ed has seen it all during his career. Ed was a Foreman for the greater part of his career, working for Mike Pompei Masonry for close to 30 of those years.

Ed always enjoyed seeing his finished results at the end of a job. Hearing the satisfaction of customers, getting compliments from clients and fellow workers along with good referrals always made the work worth it.

One of Ed’s career highlights was receiving a Certification of Historical Building Renovation. This certificate allowed him to work on historical buildings using specific techniques and materials. Preservation is a very fine subject and knowing exactly how to restore a building to its proper form can be challenging.

Even though Ed is now retired, he still tries to do work on small side jobs when possible. But his body is not able to keep up anymore. The physical labor of Masonry has taken its toll on his body. Spending the greater part of your life in ditches and trenches wears on your body.

Now that work has slowed down, Ed enjoys spending time with his family and his wife Melody, who he has been married to for 35 years. Ed enjoys collecting old fishing reels and poles, meat smoking and making jerky (which I am eating as I am writing this - thanks Ed!) He also values mentoring his son Andy along with Andy’s friends. He likes passing along his knowledge.

Ed is also a very proud Grandfather. In fact, one of his Grandsons is an accomplished four wheeling District 6 champion in quad racing. He likes to brag about him and go see him race whenever he can. 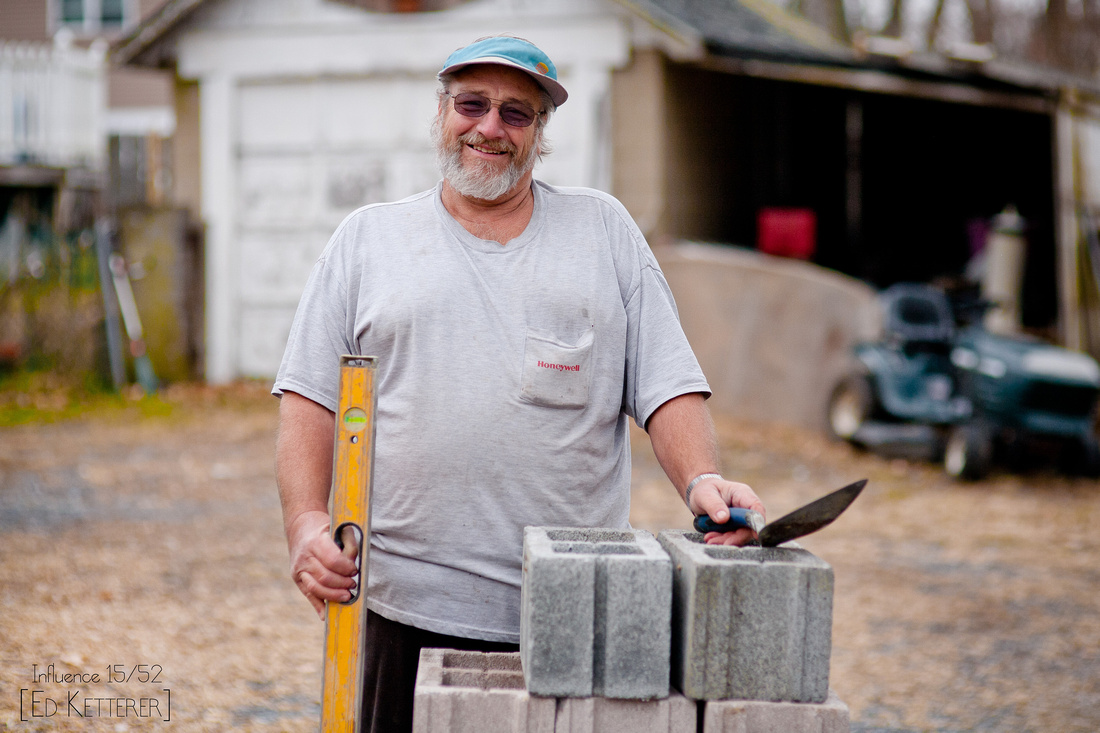 Ed leaning up against a pile of cinderblocks

Ed is like my job site father. He has been around for my entire life. He started working at my Dad’s business before I was born. He was there when I was in diapers all the up to when I was getting married in the Outer Banks.

Ed is a bit rough around the edges. But inside he’s a big teddy bear. I know Ed very well - he can be a real hard ass. Always demanding you to be on top of things. Don’t forget anything or you will hear about it! He can go from yelling at you to laughing with you in five minutes though and that’s his demeanor.

I started working with my Dad in the summer of 8th grade, I was 13 years old. Back then, my Dad’s business was booming. We were not only doing all kinds of masonry work but also general construction on the houses he was building. And Ed was my Dad’s foreman and in charge of a motley crew of around three to five guys at all times. I had to learn things and learn them quickly. And Ed let me know if I wasn’t doing it right.

As a punk teenager spending an entire summer in 90+ degree heat, throwing around 40+lb cinderblock, climbing 30’+ of scaffold with a hook of 40+lbs of bricks, shoveling 2+ tons of sand, chucking 94lb and 50lb of cement and lime in and out of a mixer wears on you. Let’s just say it REALLY wears on you! Like, you hate life. Add a big burly guy giving you shit because you moved said 40+lb cinderblock into the wrong location and you have a recipe for some bad attitudes! That recipe is what’s called construction. And it is not for the weak of heart.

Working with Ed was a lesson in dealing with people. I had to learn how to work through the physical battles in construction and deal with Ed telling me where to put it, how to do it, what is wrong with it, etc. Construction is 75% physical labor and 25% psychology. Not only with yourself but with others. When the humidity is 1000% and your body is ready to quit, it takes a lot of mental toughness to deal with not only your brain wanting to quit but having to deal with the other guys around you and not wanting to kill each other. Fun times.

Ed taught me so many things growing up. I owe him a lot and my career would not be as successful without him. I can easily attest that my efficiency in work comes from his guidance. Learning how to labor for five masons and keep an entire job site running takes a lot of efficiency. If I was off on anything I was screwed. And not only that but I did not want to let them down. That is where I get my hard work ethic. It wasn’t as much wanting to do the job fast, it was that I didn’t want to disappoint Ed. And as the boss’s son, I am sure that I had a stigma that I had to break through. I didn’t want to be ‘that kid.’ I wanted to prove my worth and I did that by working as hard as I could. I had to be on my game a lot when I was working and Ed made sure I was always on top of things. And if I wasn’t it, I heard about it. And after 12+ years of working construction I learned to become a hard worker and a fast worker at that.  Ed showed me so many ways to do things faster and easier. Sure there would be times when he would make it hard on me. Learning how to do it quicker and easier was my main goal when showing up on a job site. Nobody wants to work harder if they don’t have to! So I learned many ways to make things more streamlined. And I carry that with me now in my photography business and as a teacher. I show kids the hard way and the easy way to do things. Sometimes it’s not always about doing it fast and easy. You can learn a lot by doing something that is very physical and time demanding.

While there was plenty of grueling times working with Ed over the years, I wouldn’t go back and change a thing. He taught me how to work hard and I never wanted to let him down. And that attitude is something I take with me any time I am working for someone. And that can be as simple as helping someone move a couch, needing help with yard work, moving boxes from here to there, working a wedding, doing a favor, etc. It doesn’t matter to me. It all needs to have 100% commitment and it needs to be done fast and done right. And I personally think that attitude is what is lacking in some people these days. A little bit of elbow grease and a tough attitude goes a long way. As my son grows up I hope to instill in him a good, hard work ethic. Who knows, I may just hire Ed to come down and show him a few things. Like moving an entire cube of 64lb, 12” cap block from one end of a muddy job site to another, just because Ed said so!