Justin and Travis have both been involved in the video and movie making industry since they were teenagers. Justin was trying to tell stories and Travis was into skateboarding and shooting/editing skate videos.

Professionally, these two have a passion for what they do. They both love to work and create their own projects within their company (JTWO FIlms.) They get to hand pick their projects and invest their time into what matters most to them. Every day and every project is unique. They enjoy being able to tell someone's story. Each person has an original story to tell and being able to share those stories with the rest of the world is what motivates these two young professionals. They have been fortunate enough to travel across the country and world, immersing themselves in new cultures.

Personally, their lives are very tied up in their business. As young entrepreneurs, your personal life is your work. They are constantly "on the clock" working or traveling. When they do get an opportunity to "put their work down" both enjoy spending time away. Justin enjoys spending time with his friends. After losing his best friend Aaron right out of college, he realizes that friendship is the greatest gift in the world. Travis finds it important to create some personal time away from work as well. He loves going to baseball and sports games, home brewing his own beer and staying warm (preferably in a hot tub!)

These two have won multiple awards for their film making, including their most recent work with FullCircle, winning an Addy award. Both Justin and Travis believe that obtaining recognition for what they do is a wonderful thing. But it's not what drives them. Both want to continue to enjoy what they do and help to tell peoples stories.

Travis: Life's a garden - dig it!
Justin: Life’s a cracker….put it in some soup. 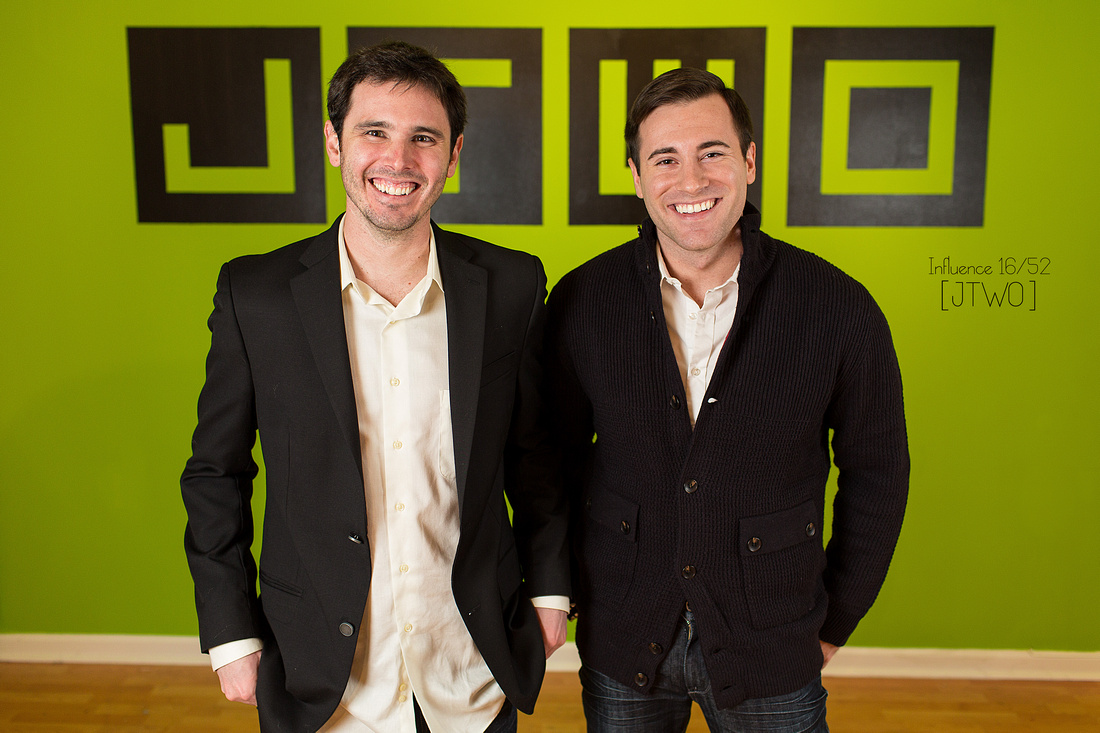 Justin is a brother of one of my best friends, Jason Jarrett. It’s funny how life works sometimes. I became good friends with Jay and his family and then started working with Justin. Maybe it was all meant to be! I met Justin about four or so years ago, not too long after he graduated from Penn State. He was just getting his feet wet in the film industry and I had just begun learning how to shoot video with my Canon 7d. I mentioned to Justin that I had a Canon DSLR that could shoot video and if he ever needed help I would love to work together. About a year or so later we started working together and it’s been a great ride ever since.

Travis is the other half of JTWO. Travis grew up in the town right next to me and went to CB West high school. Travis got a great gig working for the NFL as an intern, helping with game footage on Sundays. Travis obviously got some great connections while working there and it helped to propel their careers. These guys are like brothers and work so well together. They are somewhat opposites but together make a great team. Justin is very specific and dialed in while Travis is laid back and handles clients in a relaxed manner. Justin has the vision and hands-on approach with Travis taking that vision and putting it all together.

These two had their careers jump off to a big start with an independent documentary they made. The only bad part of that documentary was the real life story line that came from it. Justin’s best friend, Aaron Klinger, was killed in a car crash before they graduated from college. Aaron and Justin grew up together and were inseparable best friends. In college, they made a pact that once they graduated they were going to bike across the country. The tragic accident left Aaron’s friends and family grieving. But Justin decided he was going on the bike trip and he was going to do it to honor Aaron and their friendship. Close friend of Aaron and Justin, Kyler Krebs, also came along to honor his lost friend. The trip was one of soul searching and discovery for the group. They filmed their entire trip and what came from it was an award winning, heart-string tugging masterpiece. The For Aaron documentary won five awards at film festivals across the country. James Brown (CBS’s NFL Today and Showtime’s Inside the NFL) was the Executive Producer on this film and has backed Justin and Travis since then, proving the direction these two are heading.

After the documentary, Justin and Travis moved down to Philadelphia to officially start their business, JTWO films. They got their first office/studio right near The Piazza down in North Philly. After a year at that location, they moved to Old City to upgrade their location and space. Their new two floor studio/office is incredible. A lot of work has gone into transforming their business from a small desk in their apartment into great studio space in the heart of the city.

Working with these two has also been great for my business as well. Studying and learning to shoot video on a DSLR was something I wanted to dive into. So I worked hard to learn how to shoot and add video into my skills along with photography. I was able to help infuse DLSR video into Justin and Travis’s business to help bring their work up to the current trends in the industry. Being able to shoot video with my camera has led me to some awesome work with these guys and expand my horizons. Somehow I have managed to miss every single high profile shoot they have because of scheduling (this whole ‘other’ career in teaching and family thing always seems to get in the way!) But they were able to get me onto the sidelines of two Eagles games. And that is an incredible opportunity in and of itself. One of our first big projects that we worked on together was their Full Circle Brandscaping video. We spent a whole weekend in Penn State and in Justin’s hometown of Milton. The video was a big undertaking and it paid off, we won the 2013 Philadelphia Addy Award for ‘Self Promotion, Digital Advertising!’ Certainly a big honor for me to help be a part of the award and the Full Circle Crew.

The last three years have been a great ride with JTWO. Big things are coming and I am glad to have been along for a part of that journey. Justin and Travis have taken their lifelong dreams of working in the film industry and put it to paper. From shooting home videos with their childhood friends to working with NFL superstars, these guys are making it happen. Justin challenges me to “think bigger.” Challenge accepted Justin, just be careful what you wish for!