Since 2001, Rodney has provided leadership for an ever expanding Upper Bucks campus with a population of 1400 students and 125 faculty members and helped to manage the $21 million dollar Phase II expansion (recently, the Upper Bucks Campus was recognized as the fastest growing campus in the nation by Community College Weekly!) He leads all campus student affairs in the areas of student activities, new student orientation, disability services, counseling, career development and transfer services. Rodney oversees day-to-day services in enrollment management, including recruitment, public relations, financial aid, assessment testing academic advising and registration.

Rodney has his Doctorate of Education, Leadership and Innovation from Wilmington College, a Master of Science Degree from Shippensburg University and his Bachelor of the Arts in Communications from York College of Pennsylvania.

Rodney continues to teach as a Professor at Bucks County Community College. Along with his duties as the Executive Director of campus, Rodney still enjoys being in the classroom teaching ‘Interpersonal Communications and Effective Speaking.’ Rodney is also active in the community as a Pennridge Chamber of Commerce Board member, working with Habitat for Humanity and is an acting Marching Band judge for the Cavalcade of Bands. He has taken B.C.C.C. students from New York to South Carolina to Georgia and to Indiana for Spring Break Challenges with Habitat for Humanity in helping build homes.

Personally, Rodney is extremely passionate about the Arts. He wanted to be a High School music teacher (he always wanted to be Mr. Holland from Mr. Holland’s Opus!) While music did not become his full time profession, it is still a part of his life. He has been judging high school marching band competitions for the last 15 years. He was also recently asked to become part of the Miss Pennsylvania community by being a judge for the Miss Midstate in Harrisburg, PA. He is extremely honored.

Rodney seemingly had the world wrapped around his finger; however he encountered some life struggles. In 2006, he began to get a clearer understanding of who he was as a person. It was a difficult struggle for him to admit to not only himself but his family that he was gay. He struggled for many years with this fact and found himself in a dark place. He had a hard time smiling and being comfortable in his own skin. Realizing this is now a part of his life and who he is, he began to embrace his lifestyle. And now in 2013, he can say for sure that he is truly happy, “my cup is overflowing.”  He married his partner, Steve, just this past July in a Civil Union Ceremony in New Jersey with his two children and family by his side. 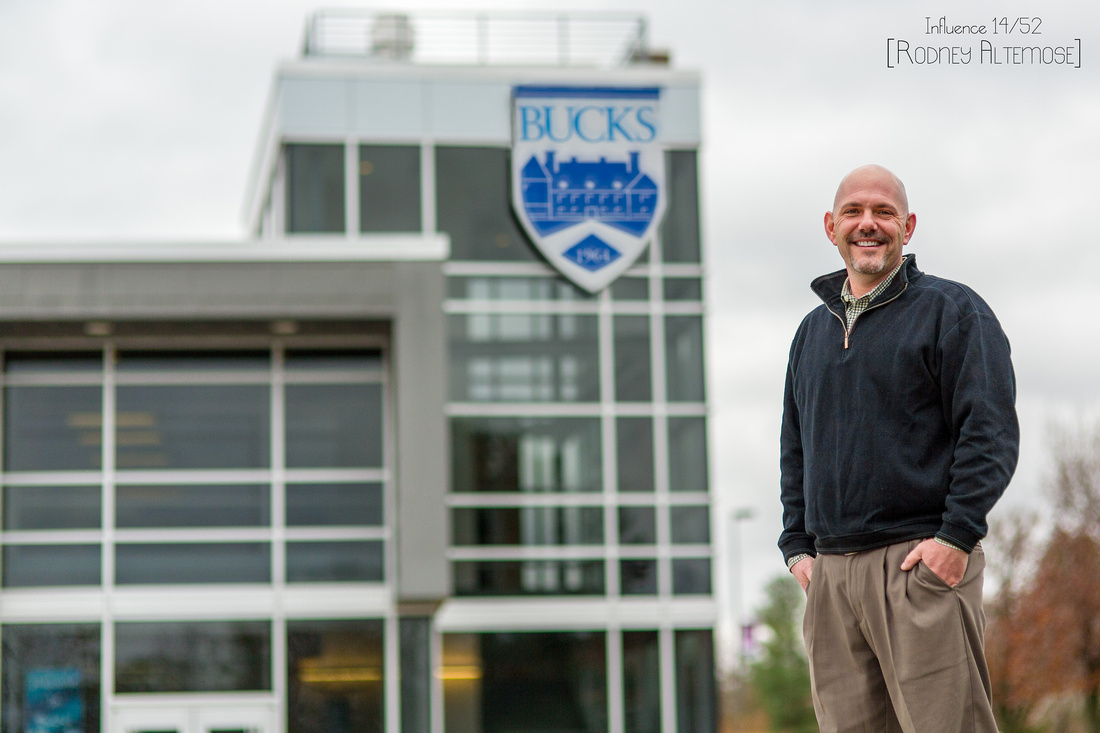 One of the most genuine people you will meet. That is Rodney Altemose.

Rodney was basically the very first person I met from Bucks County Community College (B.C.C.C) It was the summer of 2001 and I had just graduated high school. My mom and I went down to the Main Campus (Newtown,PA) of B.C.C.C for new student orientation. It was a nice day, parents went and did their thing while the students went and met with other students, toured the campus, etc. For lunch, we all met in the nice back courtyard area. During lunch, a guy from B.C.C.C. came and sat down with my mom and I and started a conversation. That was Rodney. He asked how things were going, what I was looking forward to, etc. And he genuinely cared about what I had to say and was super nice to my Mom and I. That's how we met and it's just one of those chance encounters with a nice person you don't forget.

Flash forward a few months and I was enrolled and taking classes. I only had a handful of classes down in Newtown (a solid 45min drive from my parents house.) I was working nearly full time with my Dad and taking night classes as well as a few classes during the day. I would drive down to main campus two times a day for twice a week. That was brutal! So luckily for me, the Upper Bucks campus was opening and expanding their campus, not even 5 minutes from my parents house. That was great. And low and behold, Rodney was the Executive Director of that campus. It was great seeing him again and we quickly developed a great friendship. Not only was Rodney a good person, he was a great mentor. Anytime I needed help I could turn to Rodney. His door was always open and he would help out whenever he could. I was even fortunate enough to have him for my Public Speaking class.

It was always my intention to head to Millersville after two years at Bucks. The big problem was making sure all of my credits transferred. Rodney and I would sit down every semester to make sure each class I was taking would go through to MU. We would sit down in his office and get out this monstrous 7" or so book/binder thing (you know, the internet was not what it is today!) and make sure each class coincided with each other. That was a big deal for me because I couldn't afford to lose any time while at Bucks. Rodney would even make calls out to Millersville to double check - that's something you don't forget.
My two years at B.C.C.C. were some of my favorite years of school. It was a complete 180 for me in terms of focus and dedication. As I have alluded to in earlier blog's, I was not exactly a focused student while in high school. But, that summer from June to August, something clicked. Maybe it was meeting the love of my life or maybe it was the rejection letter from Millersville. But either way, it clicked. I instantly made Dean's List in my first semester and every semester after that along with the distinguished 'President's list'. I was kicking ass and taking names! But I loved being on campus there. It was super small, very little if any distractions and I had plenty of friends to be around. I was also fortunate enough to have some awesome Professors. Some of my most favorite professors were at that campus. You know, Community College's get a bad wrap, or at least they have in the past. But without a doubt, minus a few select, and awesome, Professor's at Millersville, I had a more quality education right here at B.C.C.C. And a lot of that had to do with the way Rodney ran that campus. It really felt like a campus. Everyone knew each other, students and teachers alike. I loved going to class and learning for the first time in my life. Can't beat that!

When my two years were up, I was off to MU and never looked back. It was sad leaving Bucks but I was ready to get my degree and become a teacher. I fell out of touch with Rodney for a few years until I moved back home. We would run into each other every so often at the gym. We live close to each other so that was nice being able to see him and ask how Bucks was doing.

Catching up with Rodney for this project was awesome. We got to talk and hang out like things had never changed. I went up to campus to see the newly redesigned building. B.C.C.C did a fantastic job with the building. It's a LEED certified building with all kinds of cool 'green construction' elements. It has more than doubled the existing space and really added much needed room. When I was going to class there were around 400-500 students. Now, they have around 1400! That's an amazing statistic and just shows how good a Community College education can be when someone great is helping run that building. Rodney gave me a tour and highlighted all the new rooms, labs, etc. Nice to see things have improved since I was there.

Rodney was such a huge help and mentor during a very vulnerable time for me. It was good grades, then Millersville or bust for me. And Rodney was a pivotal force in helping me get to where I am today. Multiple degrees, an awesome job, beautiful family and awesome life are all the reasons why I can't thank Rodney enough. Funny, when I look at him now, I see the same things - he struggled personally for many years in the time after I left. But now he is happy, proud and has his family by his side. Thanks for all of your help Rodney, you are a role model to more people than you know.

nick's mom(non-registered)
you know when you meet someone and think what a nice person-well that's Rodney-Thanks Rodney for helping both my children and for being you genuine, caring all around nice guy.
Nick Pompei Photography
Thanks Kathy and Seth - very nice response Kathy. And I appreciate you hiring Rodney!
Seth(non-registered)
WOW---what an article. We can know all say we knew you when....