Herman is a savvy business professional. In 1995 he became an entrepreneur, owning a Manhattan Bagel. He also worked in the telecommunications field for many years. He was first with AT&T as the Network Operations Manager, along with being the Change Management Manager. The Network Operations Manager performed surveillance on AT&T’s switches and their entire network. The Change Management Team was responsible for performing all of the software upgrades for the switches across AT&T’s network. From there, Herman moved to Cavalier Telephone and Netcarrier as the Field Technician Manager.

Personally, Herman is a wrestler at heart. He loves coaching wrestling, mentoring student athletes and coaches alike. He trains wrestlers year round whether it’s in the gym or in the wrestling room.

Being a part of and watching kids grow into fine young men is something he enjoys along with knowing that he had a helping hand in getting them to where they want to be. The sport of wrestling has helped him develop many great relationships with wrestlers, coaches, parents and fans. The sport has truly been good to him and he enjoys trying to return the favor.

He started coaching wrestling in 1995 (same year he opened the Manhattan Bagel.) Even though he is not coaching full time or affiliated with CB East anymore, he still works with many of the wrestlers outside of their normal practice schedule.

Currently, Herman is taking time off from coaching so he can go back to school to earn his degree. He has a nine year old son, Brandon, who is the pride and joy of his life. Brandon is extremely intelligent and extremely caring and thoughtful. It has been important to Herman to see Brandon succeed in life. Herman never got his degree from college and didn’t want Brandon to follow in his footsteps. So he decided it was best to take time off so he can focus on getting his degree. He is currently enrolled full time at Penn State Abington and plans to take class year round for two years. He started last summer session (session II 2013) and his targeted graduation date is summer of 2015. At that point he will have completed 120 credits, earning his BS in Business (Individualized business plan at PSU.) Basically, he is taking 21-24 credits a semester and 18 over the summer sessions so he can complete a four year degree in only two years. Brandon likes following in his Dad’s footsteps, so he is now planning on going to college when he is done High School!

The following is a direct quote from Herman:

“I met Nick, fresh out of college, teaching in his first year at Holicong Jr High.  I will never forget the first day we met.  He came into the wrestling room as my assistant and walked out of the first practice as the Head Coach.  I promised him that I would not leave him and that I would mentor him through his first season as a coach and head coach.  There was great chemistry there and we made a fantastic staff.  Holicongs wrestling team went from 12 kids to averaging over 50 during our tenure.  Many top notch wrestlers came through our room during that time (Nick Casbar, Jon Brodzik, Devon Passman, Joe Burke, Jarrett Sanders, Nick Dau, Zak Mysza, Steve Tilsner...).  I was sad to Nick leave to take a job at Hatboro Horsham but I was happy for him for pursuing his career further.  We've remained friends and competitors throughout the years.

You won't meet a better friend, coach, or companion than Nick!!!!  Someone who cared about the kids, his family and what he does.  He and I shared a lot of the theories in life and wrestling.  It wasn't a job but something you did because you found the enjoyment in watching the kids grow into fine young men.” 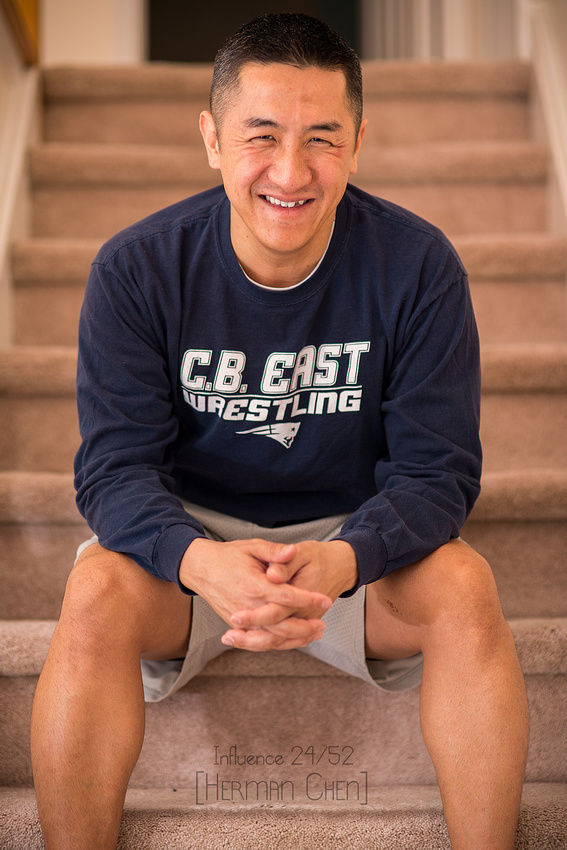 Herman Chen is an awesome guy. Somebody who will take the coat off his back and give it to you whenever you need it. Which is saying a lot because the guy doesn’t wear pants - he’s a shorts guy. And not just in the summer, I am talking year round!

I met Herman in the fall of 2006 during my first year of teaching and while at Central Bucks School District, Holicong Middle School. Since I minored in Athletic Coaching while at Millersville, I was intent on coaching. It was one of the things I was most looking forward to once I got settled into teaching and had my own classroom. So just a few weeks in at Holicong, I inquired about who the coach was and if we even had one. I was told that Herman Chen was the head coach and I could contact him to see about coaching with him. So I was given his cell phone number and called him one day after school. I will never forget it, I was in my office at school and I gave him a ring. We talked for a few minutes and I asked if he wanted to meet up. He asked me if I was at Holicong. I said yes. He said “Ok, walk out back to the football field, I am watching the game. I will be the only Asian guy out there, you’ll find me,” then hung up. I am there holding the phone like, what the heck just happened?! Haha. So out I walked and yes, he was the only Asian guy out there! So we met and talked for a while. I am not sure if it was that day or a few days later but he basically told me I was going to be the head coach. Now my plan was to just be an assistant for the first year or two so I could settle into teaching and get my life going. But no, Herman threw me right into the fire! But it was not that bad because he was right there with me the entire way. And it helped give me a lot of confidence as I quickly handled the responsibilities of being the head coach.

Herman and I connected right away. It’s hard not to with him. He is really down to earth and super generous. He had been coaching at Holicong/East for many years so he had a great rapport with the students/athletes. The kids loved him and I really felt like we had a great thing going that year. It was a lot of work for me that though.. I was working my butt off as a new teacher and trying to juggle the busy coaching lifestyle as well. But I was young and had plenty of drive. I had a blast with Herman. We had a really good team that year. Many of those kids went on to be very successful at CB East during their high school careers.

I also met many great parents. One of the nice things about working in a very wealthy district like Central Bucks is the support of the parents. Herman and I established a parent organization so to speak. It was a way for the parents to donate money to the wrestling team so we could get new workout clothes, uniforms, etc. So I also had a great support system of parents as well. And many years later I still see some of them at various wrestling events and out in the community.

My decision to leave Central Bucks was not an easy one. And a big reason was having to leave Herman and the wrestlers. Once I made my decision to go to Hatboro-Horsham it was very hard to break it to Herman. He had done so much for me and I really felt like I was abandoning him. But he understood - I wasn’t leaving because I didn’t like my coaching situation. It was strictly a professional decision, albeit a hard one. Herman and I have stayed in contact ever since I left. I see him every season and we try to catch up whenever possible.

I don’t know if I could have had a better mentor to work under during my first year coaching. Herman is a great guy and has become a great friend as well. Once he finishes up college I hope he makes his way back onto a staff coaching. Not only for his sake, but for the sake of everyone around him. His quotes above give you a great insight into the kind of guy he is. Thanks a million Herman for everything you did for me. It didn’t go unnoticed and certainly never will!