Ted enjoys his job working at Advantage Auto. He has been there now for 11 years and loves being there and a big part of that is his boss and how much he enjoys working for him. He likes the fact that he is not always in the office. He can get out to see people and it’s nice to do the same thing day in and day out. He also enjoys the people he works with. He is fortunate to have his son join him at Advantage this past year as well.

Personally, Ted loves to cut firewood. It is a favorite pasttime of him. He also enjoys being around family and friends. He likes to be with his son Jack, 21, hanging out doing whatever they can together. Ted enjoys the company of his neighbors company as well. A typical day for Ted is going to work and coming home to hang out, watch tv and spend time with his son.

Ted was married to his with Barbara for 25 years, knowing her since he was 23 years old.

Ted coached the Pennridge Greenjacket flag football team for just one year in 1988. He also umpired a slow pitch softball league for a few years.

Ted has a great history of personal accolades and accomplishments.

In 1974 he was ordained a Royal Elder at his Presbyterian Church (being ordained is for life.)

In High School and College, Ted was a letter winner in both bowling and soccer, which he then continued at Bucks County Community College.

And recently, Ted is now the President of the ruling body of his Church (United Church of Christ.) 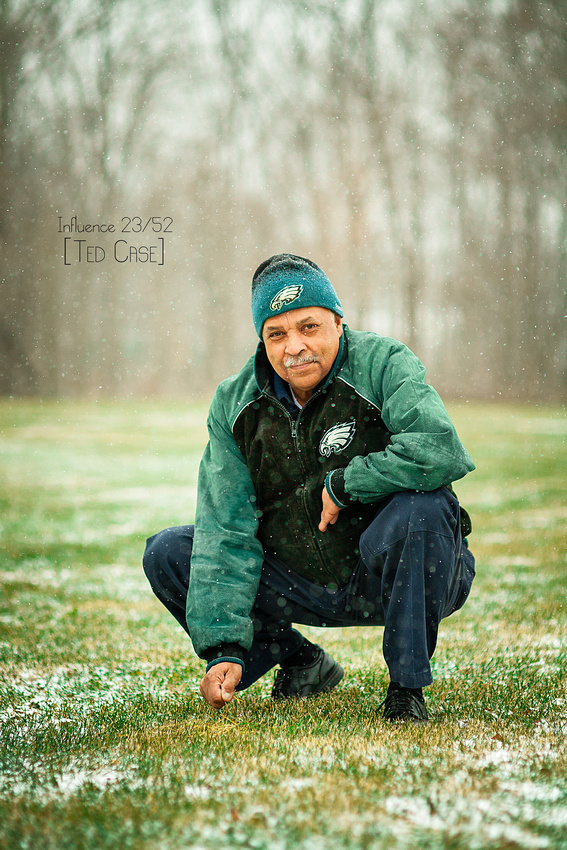 Coach Case, kneeling down like he always did in the huddle

I still have a vivid memory of my very first football practice. It was at Drunkenmiller Park in Sellersville, PA. That is where, at the time, the Pennridge Greenjackets Pop Warner football team would have their practice. I can literally see the pavement after hopping out of my parents station wagon, the green grass and my teammates like I was still there. It is etched into my brain. That day in August of 1988 started something in me that is one of my greatest attributes. It started my love for competition. And that was all from Coach Case.

One of the very first things we did as a team was to run. No not run, sprint. Coach Case lined us up behind a cone and told us to all run as fast as we could to the other cone about 20 yards or so away. He wanted to see who was the fastest on the team so we can figure out who should play where. I cannot remember any other moment in my short life, at the time, where I had this immediate sense of competition. When we lined up, I wanted nothing more than to beat every kid around me. I was focused and determined to win. When I think back to that day it’s like a light switch went off. Coach blew the whistle and I was off. I left everyone in my dust. And from that moment on, I was instilled with a sense of pride when it comes to winning and a sense of competition that still is with me today.

Another great memory from coach was the huddle. Again, the image is still vivid in my head. In flag football, coaches can be on the field. So when we as a team would huddle up, Coach would be at the center of the huddle. And I can vividly remember him kneeling down on the field, thinking about the next play he was going to call. Now, as a flag football coach of five year olds, there are only so many plays you can call. We had a good quarterback and I was the tailback or running back. Coach called me his “little scat-back.” Basically, this meant one thing - give me the ball and I was gone. I was fast. Real fast. Coach would kneel down in the huddle, pull up some grass and say “Ok Nicky, handoff to the left.” And as any five year old would say, I asked “which way is left?” Hahaha. Coach pointed and that’s all he needed to do. The QB handed me the ball and I put my short italian legs to the ground and there weren’t many who could catch me.

Sadly, after that first season, Coach Case stopped coaching and I never saw him again. It was literally 25 years until I saw him again. And that was just this past December when I tracked him down and was able to get in contact with him. I cannot believe he remembered me but he did. And not only did Coach remember me but he invited me over his house. When I saw him a few weeks ago it was like nothing had changed. I don’t remember everything about coach, hell, I was five! But I do remember how great of a guy he was. And that did not waver over the 25 years. He was as kind and generous as I remember. When I went over his house, he and I spent about an hour shooting the shit and catching up. Can you imagine trying to tell someone your life story from the past 25 years? It was really cool and something I will not forget.

However, that day also took on a different meaning for me as well. When I met up with Coach, that was the Sunday of the crazy snow storm during the Eagles vs. Lions game down at the Link. When I got to his house the game had just started and we were in awe of how crazy it was to see that much snow on the ground. I also got a chance to meet his lovely wife Barb. Barb and Ted had been married right around when he was my coach. They had known each other for years before that but were married around that time. Barb was just as nice as Ted was. Super generous and treated me like I was part of the family. Before I left, Barb gave me her email address so I could email Coach the questions I need answered for the blog (basically it is the bio for the writeup at the top.) So she wrote me up her email and phone numbers so I had them to stay in contact. I emailed her that night, saying thank you very much for the hospitality and how great it was to meet her and to see Coach again. I was going to post Ted’s picture the following week, so he had time to complete the questions for me. I emailed again but never heard back. So I waited a few more days but never heard a response back. So I waited until Thursday (post was going up Sunday) and called Coach on his cell phone. Ted, in an extremely calm voice, told me that his wife Barbara had passed away on Monday. I was devastated and shocked. I felt so incredibly bad for Coach. I had only just met Barb the week before and it was really for only a few short minutes. But I really felt like I had known her and Ted for so much longer. It really shook me up and I was just so heartbroken for Coach. He and Barb seemed like a great couple. They live modestly and I really got the sense that they loved each other deeply.

I went to the viewing a few days later and got to meet Coach’s son Jack, see Coach and give my respects. When I walked up to talk to coach, I gave him a big hug and broke down. I cried. I could barely get out what I wanted to say to him. I told him that I was so sorry, how badly I felt and asked how he was doing. It was rough. But what did Coach do? He reached onto Barb’s casket, grabbed a tissue and gave it to me. He wasn’t concerned about himself, he was concerned about me. And that just about sums up how great of a guy he is. His wife is laying there, his son behind him and his life has been turned upside down. But he immediately thinks of someone else to help them out.

It was a tremendously sad thing that happened to Ted but we were able to catch up this week. He is doing well, all things considered. He says the support of his church, family and friends have really helped him. I wonder if I had called coach a week or two later if I would have even met Barb? It’s one of those things in life that just shows you just how short it can be. I am thankful to have met Barb. And I am even more thankful to have gotten the chance to catch up with Ted and to have him in my life. I don’t remember everything as a five year old, but what I do remember is something that will stay with me forever. The way that coach lined us up and made us compete with each other forever changed me. It started a drive in me that some people don’t have. I love to compete and strive to push myself just so I can be better than that person next to me. I don’t like losing and I work hard at everything I do so I don’t. Call it weird and it may be. But I call it an attitude. And as a new father, I can only hope that my son has a Coach Case in his life. He’s just three years away from that moment. I will do my best to pass on my sense of competition, but if that doesn’t work, I hope he gets to his first practice and puts his foot on the line. And I hope he feels the same way I did.

Thank you Coach Case - you were in my life for a few short months but have forever impacted my life!