Kirk was a wrestling coach for 12 years, 11 of which were at the High School and one being at the Middle School. Kirk was also an accomplished wrestler for his alumni, William Tennent High School. At Tennet, Kirk amassed the school record for wins, with over 100. In his Senior year, Kirk reached the pinnacle of Pennsylvania wrestling by medaling at the PIAA AAA State Tournament. For his accomplishments in wrestling, Kirk was inducted into the 2003 William Tennent Athletic Hall of Fame. Kirk then pursued his career and wrestling talents at Ursinus College where he also garnered over 100 wins while competing at the collegiate level.

Kirk graduated Ursinus with a degree in Exercise Sports Science. After graduating Ursinus, Kirk began working for Hatboro-Horsham School District in the Health and Physical Education department while also starting his coaching career. Kirk coached his first year at Keith Valley Middle School then moved up to coach with Glenn Kaiser. Glenn and Kirk enjoyed many great seasons together. In Kirk’s 11 years as coach, he coached multiple Sectional, District and Regional Individual Champions, along with Sectional and District Team champions including a third place Regional Team place winner. At the State level, Kirk helped lead multiple student wrestling athletes to prestigious PIAA State medals. Kirk has been teaching at Hatboro-Horsham for 14 years. This is Kirk’s first year away from wrestling, as he had to step down to be a more dedicated father to his wife, his son and his two daughters.

Kirk is professionally passionate when he sees his students reach their full potential. He is excited to have the opportunity to positively influence their lives. He enjoys seeing his students grow throughout the semester and be able to leave his class better off than when they started.

Personally, Kirk is most passionate about his family. He works hard to be the best husband and father to three young children that he can be. Kirk really enjoys being outside, having fun and being active with his family. 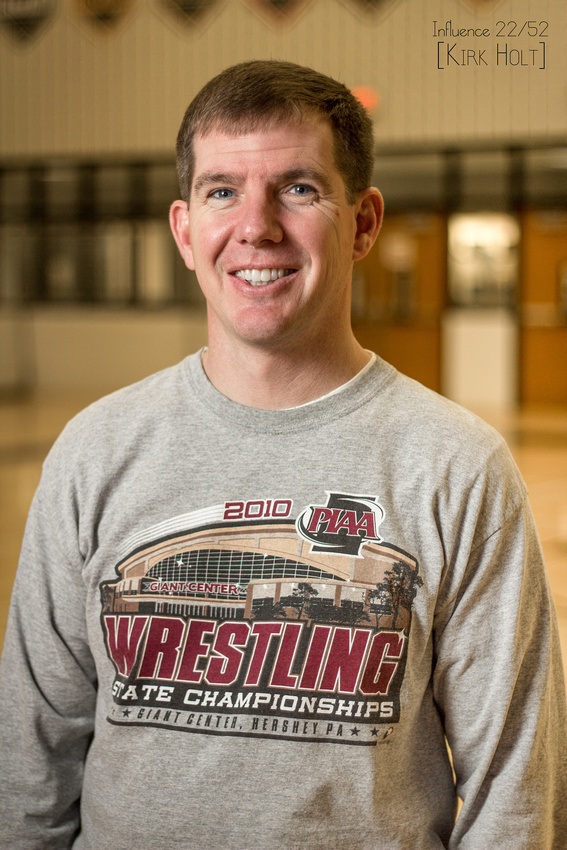 Kirk in his element, the gym at Hatboro-Horsham

Kirk was the assistant coach at H-H when I arrived here six years ago. He and Glenn Kaiser had been coaching together for years and built an excellent program before I walked in the door. If you know Coach Kaiser, he and Kirk are at the opposite ends of the spectrum in terms of their personalities. Glenn is very outward, loud and boisterous, while Kirk is very reserved and quiet. But they both are alike in their passion for wrestling. Even though Kirk is typically a more calm guy, when he gets into the corner to coach he can get very intense. The one thing that we had as a staff while coaching was our intensity for the sport and our hatred for losing. When you have those two things as a staff, it breeds winning. And for my first five years helping coach with Glenn and Kirk, we had a five year streak of state medalists. It was an accomplishment that I still consider as my highest honor as a coach.

As a young coach and assistant, there was no better role model for me than Kirk. Since he was already established as a teacher and coach here in the district, I could lean on him for advice. He would drop subtle hints to me on what was smart and what may not be the best idea. As a teacher who is also a coach, there is a dynamic that makes you different than other teachers. You are constantly around your student athletes and many times their parents. So you have to always hold yourself to very high standards and never let down. And having Kirk around was a huge help for me.

There are many memories I have from our time coaching together. From our always fun and exciting trips out to Hershey for the state tournament, to the long hours of setting up for the annual Wetzel wrestling classic, to Kirk almost taking out another coach. Yep, that was great. Two years ago, our heavyweight was wrestling and after the match, a coach from an unnamed school district decided he was going to say something to our wrestler. And lets put it this way, it wasn’t “nice job, kid”. Kirk and I were walking towards the table to talk to our kid when we heard this coach say something. Kirk turns and starts jabbing back at this guy. He nearly went to blows with him. And it had nothing to do with him wanting to pick a fight with someone - that is not his personality. He was angry because someone was verbally attacking one of his kids. And as a coach, that’s not cool. Kirk yelled at this guy to never talk to his kid again and if he had a problem, to take it up with him. I had to pull him away from the guy. And believe me, Kirk put him in his place. I loved it! To me, watching the normally modest Kirk Holt stand up for his athlete was great to see.

Last year, Kirk’s family began to have some health issues. These issues have unfortunately caused Kirk to step down from wrestling. He is needed at home more than he is in the corner. He broke the news to me last year after we were heading home from the Regional Tournament. I was devastated. I loved our time together and was really going to miss having him around. But I knew why he had to step down. He is a father and a husband first. Wrestling was certainly a major aspect of his life but he was needed at home more than he was in the practice room. Hopefully over the next few years, things will ease for him and his family and he can get back onto the mat. But until then, he is coaching his favorite team - his family. Thanks for the guidance and the fun Kirk, it was a pleasure.