Vanessa has compiled a very impressive resume since her 2006 graduation from Millersville University with a BS in Technology Education. In 2008 she earned her Masters in Education from Cabrini College. Then in 2013, Vanessa completed and earned her Principal Certification through Cabrini College and became a Registered Athletic Administrator through the NIAAA (National Interscholastic Athletic Administrators Association.)

Vanessa was hired by Neshaminy School District in the summer of 2006 and taught Technology Education at Maple Point Middle School for four years. During the 2009-10 school year, she became the Neshaminy District Technology Education Lead Teacher/Department Chairperson. Also during that year she served as the High School Equipment Manager. During the 2010-11 school year, Vanessa made a move to the Pennsbury School District to work at the High School as the Graphic Design, Robotics and Woodworking Teacher. During those five years as a teacher, Vanessa helped coached the Neshaminy girls soccer team. Vanessa decided to further her career by moving to Staunton River School High School to work as the Athletic and Activities Director. Staunton River is one of three schools in Bedford County. This is her third year as the Athletic Director.

Professionally, Vanessa is passionate about instilling her love for lifelong learning in student-athletes. She believes that academics should always come before athletics. She also enjoys working with her coaches while trying to create positive experiences for the students athletes at her school.

From the time Vanessa was a little kid and up until now, participating in sports was her favorite thing to do. Now that she is older, she has a career and cannot compete in competitive leagues like she used to. So for her, the next best thing is to be a part of student athletics. All day, every day, athletics is her world. She cannot think of a better profession that provides her with the opportunity to surround herself with athletics.

Personally, Vanessa is still a soccer player at heart. She plays in a fall and spring adult women’s league in Roanoke, Virginia. She also plays in an adult co-ed Kickball league in Roanoke. She is a diehard Eagles fan. She never misses a game on Sunday if she can help it (she’ll even miss her Sunday soccer games if the time conflicts!) She missed watching so many games growing up playing all of her sports and all day tournaments. She purchased the NFL ticket so she can stream games online and now never misses a beat! Being in Virginia, the Eagles games are not televised that often so having the NFL Ticket is a lifesaver.

Vanessa still loves graphics. Although she does not currently teach graphic design/tech. ed., she still loves using Illustrator or Photoshop in her spare time. She creates graphics for the school athletic website and twitter account. She has also started created logos for various initiatives for her school division. She also enjoys creating designs for t-shirts for any occasion.

And lastly, she has a hobby of collecting sneakers. She loves wearing sneakers and has a pair to match everything! 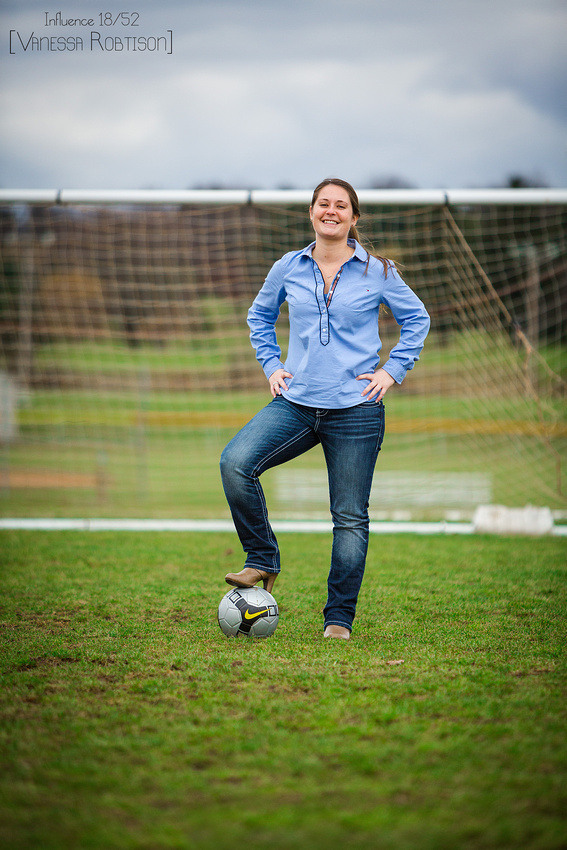 Vanessa on her 'home' turf

Vanessa is one of my ‘four crew’ friends out at Millersville. As you saw in one of my earlier posts on Jay Jarrett, we had some great times. And Vanessa was certainly a good reason why.

Vanessa was one of a handful of females in the entire Technology Education department at Millersville. She was talented in many of the areas of Tech. Ed. and those talents and career path have helped her get to the position she is in now. See, back when we were going through college and once we graduated, public schools were still hiring and the economy had not ‘fallen off.’ So when we were going through the Tech. Ed. department at Millersville, our career opportunities had many great paths to take. Between the three of us, we were hired by 3 of the best school districts in the state. Vanessa wanted badly to go back to her alma mater in Neshaminy School District. Lucky for her once she graduated a position opened up.

Vanessa was a blast to be around while at Millersville. She has a fun personality and is never afraid to speak her mind. And I think that comes from her being a female in a male dominated field. It’s not easy to be one of the only girls in a metals lab, pouring aluminum and using an 8’ tall 5 ton metal machining mill. Those things don’t just come easy for a lot of people, forget being a female. But she is one tough cookie and that is something I always admired about her. Piss her off and you will hear about it. I’m not a smart guy but I know to always be nice to Vanessa! But when you need something, Vanessa is always there for you.

Some of my best memories with Vanessa were from our Virginia Beach TECA (Technology Education Collegiate Association) competitions. We had a TECA club while at Millersville and the four of us friends were actively involved. Every year we would travel to Virginia Beach for the National Competition and Conference. It was one of the things we looked forward to every year as students. The four of us competed in the video design competition and it was 2 days of absolute craziness. We had about a day to complete the video with just a few hours to edit and complete it. It was easily the most fun I had at college and it was because I was around some great friends while doing what I loved. There were some crazy stories that came from those weekends and I am really glad that I was able to spend those days with Vanessa. We had a blast!

As the story goes, when you get older life gets in the way. Jobs and families pull you in many different directions. While Vanessa and I don’t get to see each other like we used to in college, we can pick right up where we left off. Which usually means a lot of bitching and moaning and of course, laughing! Hope you get a chance to come home soon Vanessa, it’s good having you around!