Nicole Link. Coolest sister ever and stay at home mom.

Professionally, Nicole has a bachelors in Elementary Education and a Masters in Special Education. But she has landed her dream job, being a stay at home mom. She loves making sure her daugther Hadley’s needs are met and that she is as happy and healthy as possible. She loves seeing her wake up and discover or learn something new.

Personally, Coley enjoys Pintrest. Yes, Pintrest. She also enjoys cheerleading, random tv shows, country music (please don’t hold that against her) and taking way too many pictures of her daughter Hadley and their little dog, Howard. She also loves her family to death. Her husband works a lot of hours so they can have a great family and so she can have the best job ever.

It would be remiss not to let Coley share a cliff notes version of her story:

“Well, 11 years ago we were told I had an "inoperable" brain tumor.  A very long story short. After WE, not I, endured endless appointments, we were led to our hero, Dr. Patrick Kelly at NYU who performed the life saving tumor removal 10 days after I graduated from high school.  I guess you can say, that was the day our whole world changed.  Although I survived the surgery and Tommy the twin tumors were removed, I was left with left sided paralysis. Well, I guess you can say I was naive because I didn't realize going in to the surgery that I could come out this way.  Would I have done anything different prior to the surgery, HECK NO!  Do I wish   I would have put my hair in one more ponytail, done one more toe touch, held a baby with 2 hands?  Na, because this is who I was suppose to be in life.  This is me.  I have figured out how to do pretty much everything you 2 handed people do but guess what... I do it with one hand tied behind my back!! If I told you there weren't speed bumps  on this road, that would be a lie.  The MOST DIFFICULT had to have been experiencing Bells Palsy one week prior to delivering Hadley and still be dealing with it 6 months later.  I dreamed of looking in to our precious little girl's eyes when she came into this world, and her looking in to mine.   After so many years of progress, this was a slap in the face.  It was devastating  to be kicked down.  But our precious little girl was healthy and that was all that mattered.  Personally, I hope Thomas and I can raise Hadley with the same values our parents have instilled in us.  If we can do that I would say that is probably the greatest accolade, both personal and career.
6.Anything else you’d like to tell people about yourself?

Casper is only 2 years old and is the coolest cat on the block and we almost snuck him in to the hospital after my surgery! Instead, my dad took a picture of him laying on the counter and brought it up when he came that night!!   I have the best parents and appreciate everything they have given me, especially my brother Nicholas Jamesway Pompei, he isn't my brother, he is my BFF." 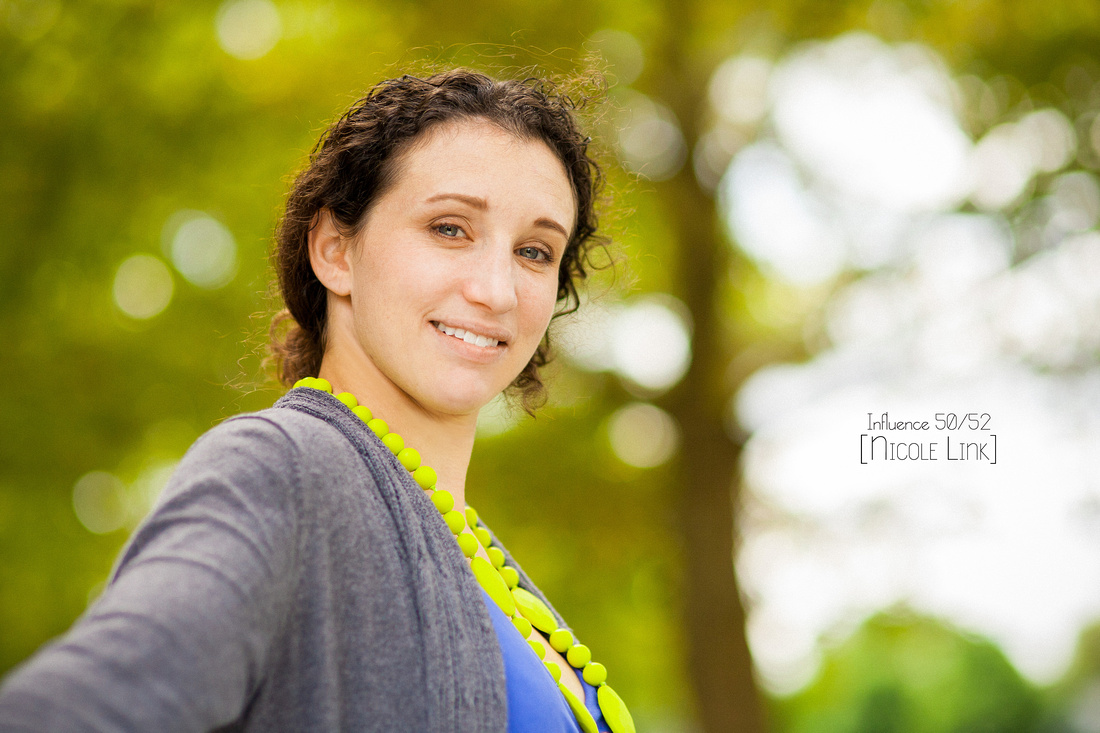 She is my sister, my only sibling and is younger than me. But I am older, wiser, better looking, smarter, funnier, cooler, etc. etc. but I don’t hold that against her. I’m just that awesome!

Nicole and I grew up fairly close. We fought as most siblings do but we had a great relationship. We both grew up involved in sports. I played football and she was a cheerleader. And we followed that path for many many years. I was a pretty good athlete as a young kid and somewhat fell off as I got into high school. Nicole went the other way. She got better and better the older she got. She was an incredible athlete by the time she was in high school and was peaking in her junior and senior years of high school. She was an awesome gymnast, a very solid track and field athlete and an incredible cheerleader. So good that at the end of her junior year she was voted as the National Cheerleader of the Year in 2002. Yes, you read that correctly. The number one cheerleader in the entire US! And by doing so was also the very first cheerleader from the Northeast since the award began in 1988. She was featured on the local news, on the cover of national cheerleading magazines, was part of the NFL Pro Bowl prestigious show, etc.

She was legit and she worked damn hard at it. She was jacked too. You certainly didn’t want to piss off Coley because she had bigger muscles than you. But one of the coolest things I have ever seen her do athletically was her pike jump. For those of you who were fortunate enough to not spend weekend after weekend stuck inside a hot gymnasium with thousands of screaming and crying cheerleaders, a pike is a jumping split. You jump as high as possible, then bring your legs out to the side and raise them as high as you can, then land back on your feet. Coley could hit a pike that would make you think about gravity being real. She would jump so high that her legs would get above your head standing on the ground. Think about that. I am 5’8” on a good day with some well cushioned shoes but my sister could jump that high then split her legs out to the side. It was incredible.

But as with all great athletes, sooner or later your time comes when you can’t perform at that high of a level anymore or something happens to you physically where your career is cut short. In my sister’s case, a brain tumor put an end to a prestigious athletic career. Towards the end of her senior year in 2003 she was diagnosed with a brain tumor. The brain tumor was in a really bad spot, growing near the base of her brain stem. Many doctors in the Philadelphia area would not do the surgery for multiple reasons. So my family had to seek out national medical specialists. Lucky for everyone, we found Dr. Patrick Kelly at NYU. So just a week after graduating high school, Nicole was undergoing brain surgery in New York City. The surgery was about as successful as it could have been. But one of the big problems to come from the surgery was partial paralysis due to the tumors physical location in her brain. So ever since the end of June 2003, my sister has been partially paralyzed on her left side. She had to relearn how to do nearly everything. Talking, eating, walking, etc. It was a long and grueling summer for her. But as you can tell from above, Nicole is not just any normal girl. She’s one tough cookie. She has relearned how to walk and use her left hand in everyday life. So good that she can handle her little ball of awesomeness, her daughter Hadley!

So while things did not go exactly to plan for Coley, she has done an amazing job. What in life goes as planned? Very little. Life is about zigging and zagging through challenges. It’s about taking what is in front of you head on and dictating the outcome yourself. Bad things happen to good people all the time, it’s a sad but inevitable part of life. But I can guarantee you that if you were to ask my sister she wouldn’t change a thing. And if I were to have asked her just before her surgery, that in 11 years, if she could be married to a great guy and have a cute little baby girl, would she trade that for a brain tumor? She would have asked me where to sign up! Things could have been so different had she not gone through her ordeal. She was planning to go away to college and she had many offers from big schools. Imagine had she gone away to some southern SEC school, met some jerk who treated her like crap? I would have gone down there to kick his ass, ended up in jail and not have been able to teach. Coley and this jerk would have reconciled while I was in jail, he would have knocked her up at age 19 and she would have dropped out of school. He would be trying to pursue his “career” in the karaoke business as a singer while she would be scrubbing the floors of their ‘Christmas Vacation’ style RV (it’s a genuinly on wheels.) So you can see how bad things could have been. So yeah, things have turned out pretty damn good for my sister!

Coley ate wild berries as a kid, enjoyed The Brady Bunch, dated like every boy at our high school and enjoyed the life of a younger sibling. That meant that she could do no harm. I got grounded if the wind picked up outside, meanwhile Coley could come home way after curfew and my Mom would bake her a cake just because. She never really seemed to have to do chores and could basically do whatever she wanted, whenever she wanted. Damn that must have been nice!

So as you can see, my sister is one of a kind. She’s the toughest person I know and I know a lot of people who can do some incredible things. She should be really proud of what she has accomplished in her life thus far (she will be 30 this September!) But she should really be proud of what she has meant to so many people. I don’t know if I have gone a few weeks in over 11 years where I have not had someone ask me how she is doing. And after I tell them how good she is doing they always seem to get this internal happiness or glow about them. You can really see that they are genuinely happy and they usually always follow it up with something along the lines of “Wow, that’s great! She’s such a special person.” Or something like “your sister is amazing, Nick.” People really care about her and always remember her story. And to me, there is nothing more emotional, thoughtful and downright special than when people ask me about her. The fact that people take a minute out of their day to ask about her means how much she has meant to them. Some people have never met her and only know her from my stories but they still care. I have an Uncle who I don’t get to see often who lives in Virginia and every single time I see him he asks how my sister is doing. Every single time, he’s never missed. Not once. He remembers every detail I told him the last time and he tells so many people in his life about her. He’s only met my sister maybe two or three times but he cares about her so much. And damn if that is not just the coolest thing. It’s just how much of an impact my sister has on this planet. It’s pretty remarkable.

I need a lot of motivation in my life to stay competitive in racing. I need to continually challenge myself to race harder, go longer and push myself harder year in and year out. And ever since I watched my sister lose her ability to do that incredible pike jump, I have taken it upon myself to continue those athletic endeavors. I have people tell me I am crazy for running a marathon, doing triathlons, swimming across lakes, etc. And so many times people ask me why I want to do things like that. The answer is so very simple. Because I can.

I love you Coley,